Venture capital is the term used to call the financial resources provided by investors to startup firms and small businesses that show potential for long-term growth. It has become a very important source of capital for entrepreneurs, who often have problems with financing their needs through risk-averse banks. Venture capital investments incorporate a high level of risk as only some of the VC-backed companies develop into successful and highly profitable businesses. In 2020, the leading venture capital backed company worldwide was the Manbang Group, which based in Nanjing, China.

Most investment into venture capital backed companies was made in the Americas, but the Asia-Pacific market has been growing steadily since 2013. This trend looks set to continue as the economies in that region develop, especially in India and China. Despite recording over 500 deals involving venture capital investments in the fintech branch in 2020, the value of venture capital funding into fintech companies in the Asia-Pacific region amounted to over 10 billion U.S. dollars, up down from 33 billion U.S. dollars two years earlier.

A record figure was achieved in terms of VC backed IPOs in the U.S.

The size of venture capital deals globally has been increasing throughout all three stages - angel/seed, early, and late. Seed capital refers to the first round of funding, which is used to cover initial operating expenses and often comes from the founders' own personal assets. Startups can also be supported by so called angel investors - wealthy individuals who invest smaller amounts of money and at an early stage. The backing from venture capitalists seems to bear fruits in certain parts of the world. For instance, alone in the U.S., over 30 billion U.S. dollars were generated by IPOs from venture capital-backed companies in 2020.
This text provides general information. Statista assumes no liability for the information given being complete or correct. Due to varying update cycles, statistics can display more up-to-date data than referenced in the text.
Published by Statista Research Department, Dec 5, 2022

Share of investment into VC-backed companies in the Americas
55%

Distribution of investments into VC companies 2013-2022, by continent 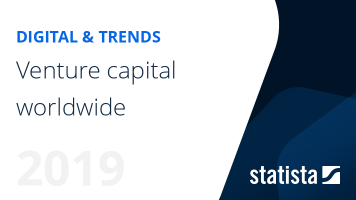 The most important key figures provide you with a compact summary of the topic of "Venture capital worldwide" and take you straight to the corresponding statistics.