Published by Erin Duffin, Apr 11, 2019
The United States 2018 midterm elections occurred on Tuesday, November 6, 2018, and by many measures, it was a record-setting year. More women ran for Congress than ever before, Senators in competitive races spent millions on their reelection campaigns, and with about 39 million people voting early alone, voter turnout is expected to surpass the total turnout for both the 2010 and 2014 midterm elections.
The midterm elections are held every four years, halfway through a presidential term, and are generally viewed as a referendum on how the president is doing. The president’s party historically loses seats in both the House of Representatives and the Senate, which can result in a shift in power to the opposing party.

Throughout the campaign, the Democrats consistently polled higher than the Republicans, and on Election Day led the Republicans by 7.3 percentage points.

The Republican Party kept control of the Senate by winning 11 seats. There are 100 voting members of the United States Senate, with two senators representing each state, regardless of population. 51 seats are needed for control. Senators serve six-year terms, with staggered elections. During this election cycle, 35 Senate seats were up for election. 23 Democratically held seats were not up for election, compared to 42 Republican seats not up for election.

Many different factors can influence how people vote in the midterm elections, including the national GDP, unemployment rate, and the job approval rating of the president. The United States continues to be politically divided, however, with income level, education level, and ethnicity also influencing how people cast their ballots.

In the following 5 chapters, you will quickly find the 27 most important statistics relating to "2018 Midterm election in the U.S.".

The most important key figures provide you with a compact summary of the topic of "2018 Midterm election in the U.S." and take you straight to the corresponding statistics.

Media and politics in the U.S. 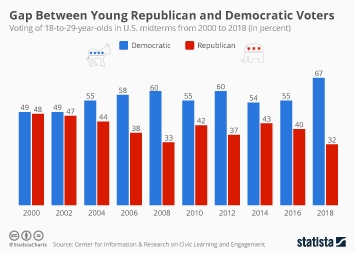 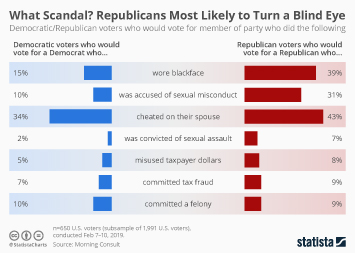 What Scandal? Republicans Most Likely to Turn a Blind Eye