Published by
John Elflein,
Mar 2, 2022
Human papillomavirus (HPV) is the most common sexually transmitted infection (STI) in the United States. There are over 150 different types of HPV, but only a small number are spread sexually and cause health problems. Most HPV infections are harmless and go away with time, but others can cause genital warts and cancer. Genital HPV infections are spread through vaginal, anal, and oral sex and can infect the vulva, vagina, cervix, rectum, anus, penis, scrotum, mouth, and throat. In most cases, those infected with HPV show no symptoms of the infection and do not even know they are infected. As of 2018, the Centers for Disease Control and Prevention (CDC) estimated that around 42.5 million people in the United States were living with HPV.

Although HPV is usually harmless, it can cause certain cancers. From 2013 to 2017, it was estimated that HPV caused around 11,000 cases of cervix cancer and 11,800 cases of oropharynx cancer among males. In relation to the total number of cases of such cancers, HPV was estimated to have caused 91 percent of cervix cancers during this period and 72 percent of oropharynx cancers among men. In general, around 83 percent of all HPV-associated cancers among women were probably caused by HPV, while 74 percent of all HPV-associated cancers among men were probably caused by HPV.

In the following 5 chapters, you will quickly find the 30 most important statistics relating to "Human papillomavirus (HPV) in the U.S.". 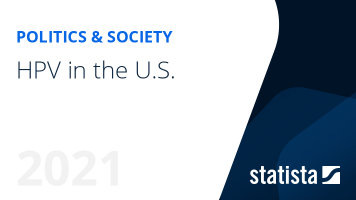 The most important key figures provide you with a compact summary of the topic of "Human papillomavirus (HPV) in the U.S." and take you straight to the corresponding statistics.

Sexually transmitted diseases in the U.S.

Women's reproductive health in the U.S.

HIV/AIDS in the U.S.