Published by
Erick Burgueño Salas,
Jan 24, 2022
In the United Kingdom, annual revenue made from national rail ticket sales before 2020 kept a steady upward trend, peaking at 10.2 billion British pounds in 2019, of which the majority was generated through ordinary fares – that is, fares excluding season tickets. By contrast, the length of rail routes open to passengers has declined over the past six decades: While 1955 recorded a peak rail network length of almost 24,000 kilometers, by 2020 this figure had decreased to just over 14,700 kilometers.

Traffic on the rail network

As the United Kingdom’s capital city, London remains the nation’s busiest region in terms of rail passenger traffic in the UK, thanks to its multiple railway terminals and numerous rail operators offering services into and out of London. Before the COVID-19 pandemic, the city handled more than 2,000 train services (arrivals and departures) to and from the city in one day only during peak hours, with connections further afield to France and Belgium. It remains to be seen how far the controversial planned HS2 high-speed rail line connecting London with other significant UK cities such as Birmingham, Leeds, Liverpool, and Manchester will foster further growth in inbound and outbound traffic.

In the past years, customer satisfaction with the UK’s rail services has hovered around 80 percent, as inadequate infrastructure improvements have led to regular delays and cancelations, increasing rail fares, and overcrowded trains. Conflict over whether the rail industry should once more be nationalized is growing – especially as a result of the ongoing increase in rail fare prices.

The UK’s rail network was officially privatized back in the 1990s to boost competition on the rail network. The COVID-19 outbreak in early 2020, however, resulted in the UK government’s temporary and unofficial “reassumption” of the national rail industry’s financial risks, timetabling, and staff as it enforced strict regulations during the lockdown beginning in late March 2020. This shift in regulatory power over railway services meant that private rail franchises were able to somewhat compensate their subsequent dramatic loss in ridership and revenue with public funds issued by the government.

In the following 5 chapters, you will quickly find the 26 most important statistics relating to "Rail services in the UK".

The most important key figures provide you with a compact summary of the topic of "Rail services in the UK" and take you straight to the corresponding statistics. 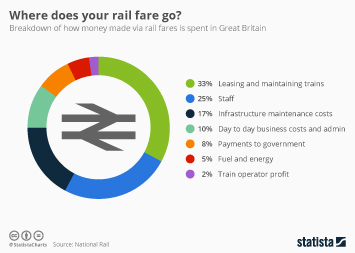