Jaguar Land Rover Automotive is a British luxury automobile manufacturer, established as a subsidiary of Tata Motors in 2008. In their 2018 financial year, the company had made 1.5 billion British pounds in pre-tax profits. These had been declining since peaking at 2.6 billion British pounds in 2015. In the same time period, the company has ramped up their investments, including into their own products, spending 4.2 billion British pounds in the 2018 fiscal year. This was more than four times the amount spent in 2011/12.
Globally, the luxury car market was worth 495 billion euros in 2018, the highest amount in the time period between 2010 and that year. Mercedes-Benz was the leading luxury car brand by sales volume, with Jaguar Land Rover coming in fifth place. The most cars had been sold in the UK, at nearly 116,000 units. This was unsurprising, given that it was the automobile manufacturer's home market, although figures from previous years show that China had seen even higher sales than the UK in the past.

Regarding sales in different countries, approximately 18,000 Land Rover cars had been sold to Germany in 2018 for example, a decrease to the previous three years. By comparison, Jaguar sales in that country had been growing, amounting to 9,500 units that same year.

In terms of licensed vehicle numbers in their home market, there were 344,299 Range Rover cars registered in Great Britain as of the third quarter of 2018, while the Jaguar XE series had seen registrations rise to 35,845 units since its introduction in 2015.
This text provides general information. Statista assumes no liability for the information given being complete or correct. Due to varying update cycles, statistics can display more up-to-date data than referenced in the text.

Registration figures in the UK 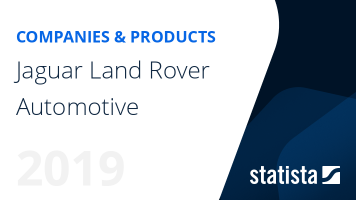 The most important key figures provide you with a compact summary of the topic of "Jaguar Land Rover Automotive" and take you straight to the corresponding statistics.

Registration figures in the UK