Published by
Eloise Trenda,
Nov 26, 2021
Whether for reasons of product preference or because consumers have less time to prepare fresh food, the frozen food market worldwide is thriving. Examples of popular frozen foods around the world include pizza, poultry, seafood, lasagna, spinach, fries, among many other products.
Canada is a major player in the international trade of frozen food. In 2020, Canada exported close to 1.03 million metric tons of frozen potatoes to other countries around the world. When it comes to the domestic market, quarterly retail sales of frozen food in Canada have steadily increased over the past few years, with sales peaking at 2.76 billion Canadian dollars in the fourth quarter of 2020.

Specific segments of the Canadian frozen food market are projected to grow substantially. For example, retail sales of frozen desserts were forecast to reach just over 35 million Canadian dollars in 2021, an increase of almost eight million Canadian dollars since 2014. The frozen bakery products segment is likewise predicted to witness increasing sales. Retail sales of frozen bakery products amounted to roughly 210 US dollars in 2017 and are expected to reach almost 250 million US dollars by 2022.

According to a 2019 survey, some 35 percent of Canadians stated that they cooked frozen food a few times a week on average. It was also reported that Canadian consumers are most fond of cooking frozen pizza at home. For Canadians, the main factor considered when purchasing frozen food is price. The majority of Canadians were reported to typically purchase name brand frozen foods over frozen foods from store brands. Due to the Corona outbreak, frozen food products, such as vegetables, fruit, and potatoes, experienced a surge in sales in Canada in 2020: frozen vegetable sales grew by 120% compared to the same week in 2019.

In the following 5 chapters, you will quickly find the 27 most important statistics relating to "Frozen food market in Canada". 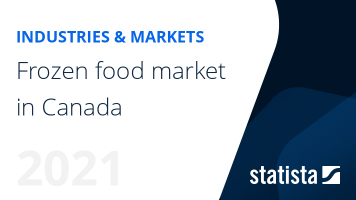 The most important key figures provide you with a compact summary of the topic of "Frozen food market in Canada" and take you straight to the corresponding statistics.