Published by
Eloise Trenda,
Dec 7, 2021
Frozen desserts can take a number of forms, including traditional ice cream, gelato, soft serve, frozen pies or cheesecakes. Such frozen treats are enjoyed by Canadians throughout the country, especially throughout the warmer summer months.
Canadians certainly have a sweet tooth, an August 2019 survey found that about a quarter of Canadians eat ice cream between two and three times a month, and nearly two percent eat ice cream on a daily basis. When it comes to where to consume ice cream, the vast majority of Canadians prefer to do so in the comfort of their homes. Unconventional ice cream flavors have been developed in recent years, to adapt to upcoming food trends and the demands of more adventurous consumers. Despite such developments, chocolate remains the favorite flavor for Canadians.

The national love of ice cream does however see some signs of diminishing, as the volume of ice cream available for consumption has gradually declined year on year, reaching a low of 3.9 liters per person in 2017. Since 2018, however, this figure has been on the rise again, reaching just over four liters per person. This could further encourage product experimentation, to tempt consumers to try new and exciting types of ice cream. The market for artisanal ice cream in Canada has seen an increase over the years, perhaps pointing to a change in consumer tastes from standard ice cream to more specialty flavors and brands. The same trend can be seen within the frozen desserts category as a whole. Retail sales of frozen pudding desserts are expected to increase to around 35 million Canadian dollars by 2021.

Manufacturers, however, continue to produce more and more ice cream each year, with around 155 million liters of hard ice cream produced in 2019. The most ice cream and frozen dessert manufacturing establishments can be found in Ontario and Quebec. Dairy Queen is one of the most popular frozen dessert chains in Canada, offering several frozen dessert products, along with hot and savory options.

In the following 5 chapters, you will quickly find the 29 most important statistics relating to "Frozen desserts in Canada". 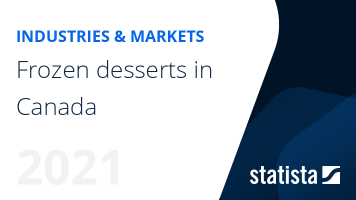 The most important key figures provide you with a compact summary of the topic of "Frozen desserts in Canada" and take you straight to the corresponding statistics.