Changing lifestyles impact consumer behavior, and the speed of modern life turns European customers towards frozen food - food that is easy and quick to prepare. On the weekends, consumers might enjoy long cooking sessions, but with more and more adults working full-time, convenience is often key during the week.
Germany was the most important frozen food market in Europe in 2020, with an estimated market share of 19 percent and a market value of 13.8 billion U.S. dollars, followed by the United Kingdom (17 percent market share, 12.3 billion U.S. dollars value) and France (13 percent, 9.4 billion U.S. dollars).
In 2020, over 3.66 million tons of frozen food items were sold in Europe’s leading food market, Germany. The majority of the revenue here came from food retail. In 2020, revenue in this market amounted to roughly 9.4 billion euros. The most popular products were frozen fish (approximately 1.23 billion euros), pizza (1.2 billion euros), and meat (820 million). The average household in Germany consumed almost 90 kilograms of deep-frozen food in 2020. Between 2009 and 2020, the per capita consumption of frozen food increased from 39.3 kilograms per year to 44.8 kilograms, a sign that frozen food is indeed becoming more and more popular.

In Great Britain, over 2.2 billion units of frozen food products were sold across the nation. The total value of frozen food retail sales amounted to approximately 7.21 billion British pounds that year. In terms of users, ice cream is the most popular product in the UK, with approximately 30.6 million consumers in total, followed by frozen vegetables at 25.2 million consumers. The leading chilled and frozen food brands in the UK according to the YouGov BrandIndex were Cathedral City (Buzz score of 7.7), Qyorn (6.4), and Lurpark (5.8).

In the Netherlands, the best-selling frozen food products in 2019 were snacks (17.1 percent of the total turnover), pizza (16.9 percent), and multipacks/bigpacks (12.5 percent). Expenditure on frozen food products was especially high among well-to-do households with children, who on average spent 195 euros per year on frozen food. On the other end of the spectrum, singles spent considerably less on frozen food products, between 97 and 102 euros annually.
This text provides general information. Statista assumes no liability for the information given being complete or correct. Due to varying update cycles, statistics can display more up-to-date data than referenced in the text.
Published by Statista Research Department, Nov 24, 2021

Sales value of frozen foods in Europe 2020, by product category

Frozen desserts sales value in Europe in 2020, by country

Sales value of frozen foods in Europe 2020, by product category

Frozen desserts sales value in Europe in 2020, by country 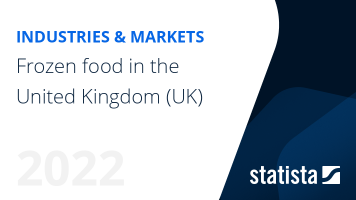 The most important key figures provide you with a compact summary of the topic of "Frozen food market in Europe" and take you straight to the corresponding statistics.