Published by Statista Research Department, Sep 26, 2022
Russia's alcohol consumption has significantly decreased compared to the 1990s. The change in drinking habits has transformed the market of alcoholic beverages, shifting the industry focus on low-alcohol products and beer. Alcoholic beverages accounted for nearly seven percent of the total retail revenue in Russia. The country is one of the world's leading beer and wine markets. The volume of beer production was the sixth-highest in 2021, at over 82 million hectoliters. Moreover, Russia was the ninth-largest wine importer, having received over one billion euros worth of that beverage in 2021.

The most popular alcoholic drink in the country is beer. The per capita beer consumption has been increasing since 2017. An average Russian aged 15 years and older drank around three liters of beer in a year. This figure was significantly lower than in 2008, when it peaked at nearly 4.7 liters. Accordingly, beer production volumes ranked the highest among alcoholic beverages on the market. In terms of retail trade, vodka and beer accounted for the largest share of the sales revenue. Cognac was the most costly alcoholic drink, while beer listed the cheapest.

Sales of alcoholic beverages in Russia were forecast to decline by 27 percent in 2022 compared to the previous year. This was mainly due to the economic impact of the Russia-Ukraine war. Several international producers of alcoholic drinks, such as Diageo, Brown Forman, Carlsberg, and Heineken, suspended operations in Russia. On the other hand, food prices increased across the country, consumers were less ready to spend money on expensive alcohol. At the same time, the government provided financial support to domestic companies in the sector in 2022, and these were expected to increase their output in the following years. Between 2023 and 2025, the revenue of alcoholic beverages in Russia is projected to increase gradually while remaining below the 2021 figure of almost 35 billion U.S. dollars.

In the following 5 chapters, you will quickly find the 33 most important statistics relating to "Alcohol market in Russia". 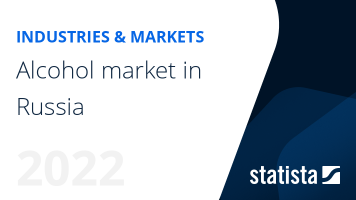 The most important key figures provide you with a compact summary of the topic of "Alcohol market in Russia" and take you straight to the corresponding statistics.