The most popular alcoholic drink in Europe is beer, with a market share of roughly 37 percent of all alcohol sold in 2018. Wine and spirits had a market share of 34 and 25 percent respectively. In 2021, the combined sales volume of beer in Europe was over 44 billion liters. Although lager remains popular, especially the craft beer market is booming in Europe. In recent years, the number of craft beer-brewing microbreweries in Europe exploded. Whereas there were roughly 2,400 small breweries in 2009, this number increased to over 8,000 by 2019.

Europe’s heaviest drinkers can be found in Czechia, which had the highest pure alcohol consumption per capita, with 14.3 liters consumed on average in 2019. Latvia and Moldova followed, with 13.2 and 12.9 liters respectively. Zooming out, it becomes apparent that Europeans consume more alcohol than people on other continents. In the top ten of countries with the highest per capita consumption, Uganda is the only non-European nation.
This text provides general information. Statista assumes no liability for the information given being complete or correct. Due to varying update cycles, statistics can display more up-to-date data than referenced in the text.
Koen van Gelder
Research expert covering Tobacco and Meal Kits
Get in touch with us now
Published by Koen van Gelder, Nov 28, 2022

Alcohol consumption increase due to COVID-19 in the UK
12%

Per capita consumption of alcoholic beverages in Germany
123.8L

Consumption of alcoholic beverages in Germany 2008-2020

Consumption of alcoholic beverages in Germany 2008-2020

Alcohol consumption in the Netherlands 2021, by gender 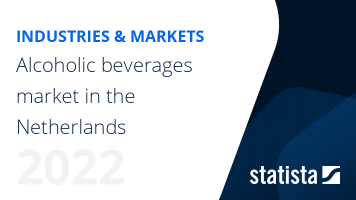 The most important key figures provide you with a compact summary of the topic of "Alcohol market in Europe" and take you straight to the corresponding statistics.