Alcohol use in the United Kingdom (UK) - Statistics & Facts

Published by Conor Stewart, Dec 7, 2018
Alcohol consumption is an enjoyed pastime not only in the United Kingdom, but across the globe. However, the levels at which individuals consume alcohol can negatively affect their state of health. It is advised that men and women should not consume more than 14 units a week on a regular basis.
In 2014, it was found that 59 percent of adults surveyed were drinking at lower risk, corresponding to less than 14 alcoholic units per week. Individuals over the age of 16 years were most likely to drink twice a week, or less and typically consume up to 3 / 4 units of alcohol in one drinking session. The drink of choice for individuals on their main drinking day was beer/lager/cider/shandy of normal strength for men and wine for women. In juxtaposition, the number of individuals claiming to be teetotal - meaning they do not drink alcohol at all is - on the rise.

In the UK it is illegal to sell or serve alcohol to individuals under 18 years old. Nevertheless, children as young as eleven have admitted trying alcohol at least once, with the main alcoholic beverage of choice being beer/lager/cider for boys and spirits for girls. The general opinion among teenagers is that it is ‘okay to try alcohol’ before reaching the legal age. Despite this, the number of young people consuming alcohol has decreased in recent years.

The consequences of alcohol consumption can vary from alcoholic liver disease, mental behavioural disorders to unintentional injuries. Excessive alcohol consumption was the leading reason why individuals referred themselves for help with substance abuse in Wales. The alcohol-related death rate increased by almost a third since 1994 to 18.2 percent of men and 9.2 percent of women in 2014.

In the following 4 chapters, you will quickly find the 27 most important statistics relating to "Alcohol use in the United Kingdom".

Statistics on the topic
Share of individuals binge-drinking alcohol in England
17%
Mean number of alcohol units consumed per week among men in Scotland
16.1
Share of men who do not consume alcohol in London
24%

The most important key figures provide you with a compact summary of the topic of "Alcohol use in the United Kingdom" and take you straight to the corresponding statistics.

Social effects of alcohol use

Deaths due to alcohol use 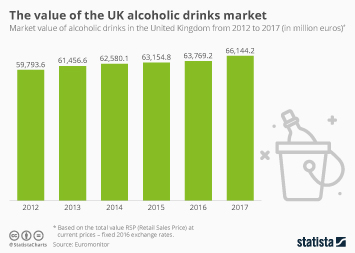 The value of the UK alcoholic drinks market