Published by Statista Research Department, Sep 19, 2022
The postal services industry is deeply enveloped in structural changes affecting its different sectors. While the introduction of e-mail and instant messaging have seen mail volumes decline steadily in the past two decades, e-commerce has become the greatest contributing factor to growth in parcel shipments. In 2020, over 17 billion packages were sent domestically within industrialized countries, accounting for the greatest share of global shipments. This figure was noticeably larger than the number of packages it delivered internationally.

The United Kingdom postal and courier industry generated over 25 billion British pounds in turnover in 2020, which translates into greater contributions to the national economy. Consumers within the highest ten percentile of gross income decile groups spend the most on mail and parcel delivery services, at 1.3 British pounds of weekly household expenditure in 2021. Letter volume in the UK continued to drop to about 7.8 billion pieces in 2021. However, due to the online shopping activities increased during the Covid-19 pandemic lockdown, parcel shipments significantly grew to an astonishing 4.2 billion items that year. In return, the parcel industry in the UK earned about 14 billion British pounds in revenue.

Established in 1516, Royal Mail operated as a public postal service provider for most of its history, before the government sold the majority shares following the Postal Services Act in 2011. The recently privatized company reported over 12.7 billion British pounds in revenue in its 2022 fiscal year. Royal Mail was responsible for the delivery of about eight billion addressed letters and 1.5 billion parcels in the UK that year.

In the following 5 chapters, you will quickly find the 29 most important statistics relating to "Postal services in the UK". 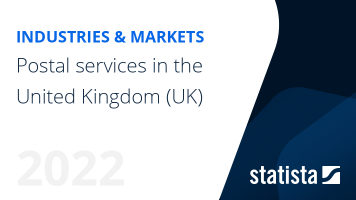 The most important key figures provide you with a compact summary of the topic of "Postal services in the UK" and take you straight to the corresponding statistics.

Parcel market in the Netherlands