Published by
Sanyukta Kanwal,
Jul 8, 2022
India witnessed an outbreak of the coronavirus, otherwise known as COVID-19, or SARS-CoV-2 in late January 2020 when three Indian students travelled to the southern state of Kerala from Wuhan in China - the epicenter of the outbreak. All three tested positive for COVID-19, confirming a local contagion. At the same time, several other cases were detected in other parts of the country, most of which were linked to people with a travel history to affected countries. Infections increased rapidly since March 2020, with a significant growth in testing.
The state of Kerala was commended for acting speedily in containing further spread of the virus. Thousands were consistently being placed in home or institutional quarantine, monitored for symptoms and infections. However, India had one of the lowest testing rates for the virus compared to other countries, despite ramping up over recent months.

India’s healthcare workers and public officials were vigilant in their fight against the virus. Despite that, the country’s healthcare infrastructure may not be enough in the face of an epidemic. Data from 2017 showed India had less than 0.5 hospital beds per 1,000 people Moreover, the country’s population density was one of the highest in the world, making it harder to contain local transmissions if strict precaution measures are not followed. A lacking healthcare infrastructure also remains a major cause for concern. This was because of an inadequate public system leading to shifting the weight to the private sector, which was not prepared for an emergency of this magnitude.

The Modi-led government announced a nation-wide lockdown in the end of March until May 2020. An increase in daily cases and a rising death count put India ahead with the fastest infection rate worldwide in August 2020. The south-western state of Maharashtra reported the most cases across the country. With restrictions having eased over the latter half of 2020, the economy was able to finally bounce back to a certain extent, especially during the festive season between September and October. However, with the start of 2021 complacency on issues such as social distancing and wearing masks led to a gradual increase in the number of infections. While the second wave was driven by the delta variant killing almost two million people, the omicron outbreak passed more gently with a significantly lower number of deaths.

Eight weeks after the second wave of the pandemic began, India reported record numbers for daily infections and deaths for nearly two weeks in April 2021. Following the sudden surge in cases, several states and major cities went into some form of lockdown or curfew. With a scrambling demand for oxygen cylinders, over-capacitated hospitals and burned-out medical staff, the country’s health infrastructure was in distress, barely able to bring the situation under control. Aid was received from several countries including the United Kingdom, the United States, and Germany demonstrating solidarity in the fight against the virus. India’s civil struggle between the center and states for a more logically coordinated response and improved policies including the vaccine roll out program had been pressing during this time.

In the following 5 chapters, you will quickly find the 24 most important statistics relating to "Coronavirus (COVID-19) in India".

The most important key figures provide you with a compact summary of the topic of "Coronavirus (COVID-19) in India" and take you straight to the corresponding statistics. 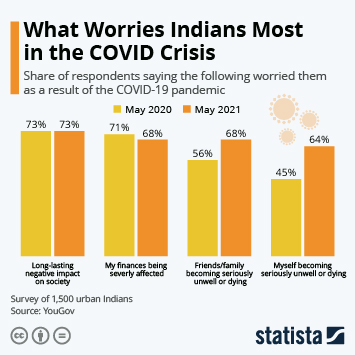 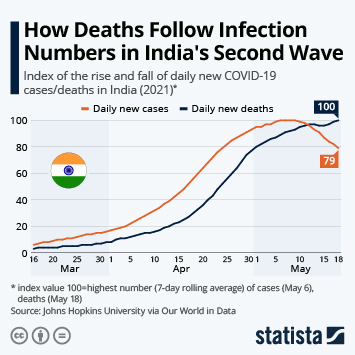