Published by Statista Research Department, Sep 8, 2022
Set up in 1973, Reliance Industries Limited started as a polyester company in Mumbai. Dhirubhai Ambani, the founder of the conglomerate, expanded the business into textiles, gaining popularity under the brand name Vimal. As the textile sector flourished, the company diversified into petrochemicals as part of its growth strategy. The 1990s thus saw Reliance turning to overseas capital markets under a petroleum setup.

The late 90s saw Reliance emerge as a key player in the private sector for petroleum, expanding later to include packaged LPG. This was while setting up a telecom enterprise within the umbrella. By 2000, the Mumbai-based conglomerate housed the largest refinery in the world located in Jamnagar, Gujarat. By 2006, it had become a key player in the country’s petrochemical market.

The brand’s entry into the retail sector began with Reliance Fresh growing to 600 stores across 57 cities by 2008. This sector now includes several brands catering to a variety of consumer needs from consumer electronics, to fashion and groceries. Reliance Retail recorded exponential growth in revenues in the last decade.

A significant disruption came from the conglomerate’s telecom division. Registered in Gujarat, Reliance Jio made a grand entry onto the national stage in September 2016 with 4G services, acquiring 16 million subscribers within its first month of operations. By December 2019, it was the leader among mobile network operators in India and ranked third worldwide with nearly 400 million subscribers. Jio is now on the path to conquering the digital services market, propelled by the government’s Digital India initiative.

Diversifying with the times

The conglomerate has also ventured in recent years into the sports arena. One of these was with Mumbai Indians team in the Indian Premier League cricket franchise; the other - the establishment of the Indian Super League for football in the country.

The launch and success of these businesses did not come without controversies – both in terms of lawsuits and sibling rivalry. While Ambani’s story is one that is inspiring to the average Indian, his death in 2002 caused the group to split after years of differences between his sons Mukesh and Anil. The year-long feud between the siblings was the center of public attention. Reliance Industries Limited, one of the companies that resulted from the split, is now managed by Mukesh Ambani, who is the richest man in Asia.

In recent advancements, the company wiped its 21 billion-dollar debt slate clean in 2020. A significant portion of this came from Facebook’s investment in Jio earlier that year. This doubled the conglomerate’s shares from a low in March 2020, making a show of Mukesh Ambani being least hit compared to other billionaires impacted by the coronavirus (COVID-19) pandemic.

In the following 5 chapters, you will quickly find the 22 most important statistics relating to "Reliance Industries Limited". 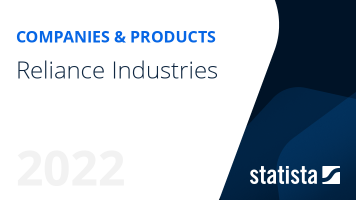 The most important key figures provide you with a compact summary of the topic of "Reliance Industries Limited" and take you straight to the corresponding statistics.