Retail relates to the sale of goods and services to consumers. Transactions take place through various channels of distribution across an ever-growing range of industries, such as food, motor vehicles, apparel, and electronics. While physical or in-store retail is the dominant channel in this market, forms of non-store retailing are becoming increasingly popular too. Online retailing or e-commerce channels are carving out a share of the retail sector in many global markets. Many retailers operate an omnichannel model, which aims to integrate offline and online channels in a seamless way. In 2021, the global retail market generated sales of over 26 trillion U.S. dollars, with a forecast to reach over 30 trillion U.S. dollars by 2024.

The United States is home to the top three retail companies of the world, namely Walmart, Amazon, and Costco. In 2021, the total retail market of the United States reached a revenue of over 6.5 trillion U.S. dollars. Another giant market in the consumer goods and retail industry, China's retail revenue was 13.1 trillion yuan, or some two trillion U.S. dollars in 2020. Looking at other countries with booming retail markets, India’s retail sales was estimated to reach 1.2 trillion U.S. dollars in 2021. The country’s retail industry is dominated by the unorganized or the informal sector, which is defined as businesses held by own account workers i.e. self-employed individuals or household members assisting them. In Europe, the United Kingdom and Germany are two of the leading retail markets. In 2021, retail sales in Great Britain amounted to over 465 billion British pounds, or roughly 560 billion euros, while Germany recorded retail sales worth 586 billion euros in the same year.

In recent years, sustainability has become one of the key metrics both for retailers and consumers. Many consumers view making green and sustainable choices when shopping as beneficial not just for the environment, but also for themselves. Despite the positive trend, sustainable products are not as widely accessible and affordable as their mainstream counterparts. For consumers around the world, price remains to be the main driver for purchasing more sustainably. In a survey, over one-third of consumers said if prices were more comparable to alternatives, they would be encouraged to buy more sustainable products.
This text provides general information. Statista assumes no liability for the information given being complete or correct. Due to varying update cycles, statistics can display more up-to-date data than referenced in the text.
Tugba Sabanoglu
Research lead covering Non-food CG & Retail
Get in touch with us now
Published by Tugba Sabanoglu, Apr 21, 2022 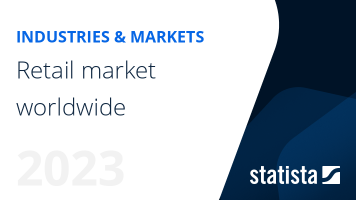 The most important key figures provide you with a compact summary of the topic of "Retail market worldwide" and take you straight to the corresponding statistics.