Published by
Adriana Sas,
Oct 27, 2022
The first mobile network in Poland was established in 1991. The year 1996 is considered as the beginning of modern mobile telephony in the country, but the first operator appeared on the market much earlier. So far, the high costs of phone activation, the need to pay a subscription fee, and the risk of long phone calls have effectively discouraged the purchase and use of mobile phones. The turn of the century was the time for the first experiments with the mobile internet.
The internet is still a crucial direction for the development of mobile networks, which is best proven by the implementation of LTE Advanced technology. Just as in 1996, GSM telephony freed Polish society from obsolete analog cells. In 2016, mobile internet released Poles from outdated methods of communication.

The mobile market in Poland is saturated, which is reflected in the decreasing number of SIM cards. At the end of 2021, a total of 56.6 million active SIM cards were recorded.

Due to the mandatory registration of prepaid cards in 2016, a significant decrease in the number of prepaid users is observed in favor of post-paid customers. As a result, at the end of 2020, prepaid users constituted only 27 percent of all users of mobile telephony.

In 2021, the increasing trend for revenue from mobile telephony services continued. The operators' total revenues amounted to more than 13 billion zloty and were over seven percent higher than in the previous year. Growth in revenues was recorded in almost all types of mobile services. The mobile telephony market represented a significant area of telecommunication activity in 2020. This market generated nearly 33 percent of revenues in the whole telecommunications market in Poland.

As of 202q, the network operator P4 was the leader in the number of mobile telephony users with a 29 percent share. Orange Polska occupied second place with 27 percent of users. This is the similar result as in the previous year. The third position was held by Polkomtel, which was the only one among the four largest companies to record a significant increase in market share.

In 2021, the duration of outgoing calls in mobile telephony decreased by 1.3 percent. Mobile customers made calls with a total duration of 122.2 billion minutes. Statistically, it was 3210 minutes per year for every inhabitant of Poland, which appeared to be 24 minutes less than in 2020.

The " Roam Like At Home" regulation significantly impacted the use of mobile telephony services by Poles. The application in other EU countries of the same rates for voice calls, SMS, and data transmission as customers in Poland resulted in Poles using their mobile phones much more frequently abroad. The total duration of voice calls made (initiated) while roaming in 2021 amounted to nearly 3.9 four billion minutes. Compared to the previous year, this is an increase of four percent.

Poland is also preparing to implement the 5G network, which is supposed to enable a 50 to 100-fold increase in transmission speed compared to current 4G networks. This technology will accelerate, among other things, the development of the Internet of Things, telemedical services, autonomous vehicles, and smart cities. Average 5G download speed scored of nearly 82 Mbps in Poland in 2021.

The European Commission has obliged Poland to launch a 5G network in one of the largest cities by the end of 2020. The city recommended by the Ministry of Digital Affairs for the 5G pilot network implementation is Łódź. By the end of 2025, all major cities of each EU member state and all major transport routes will be covered.

In the following 6 chapters, you will quickly find the 46 most important statistics relating to "Mobile communications in Poland". 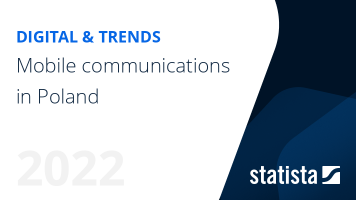 The most important key figures provide you with a compact summary of the topic of "Mobile communications in Poland" and take you straight to the corresponding statistics.