Everyone believes that France is the country with the highest rate of wine consumption, but against all odds, the Vatican City holds the first place in the ranking. In this little city-state enclaved within Rome, more than 54 liters of wine are consumed per person each year, whereas only around 54 liters are consumed in France. Meanwhile, France has been investing in winemaking for a long time and building up a reputation and image as “the country of wine”.
In 1980, 50 percent of the population drank wine on a regular basis, while 20 percent had not even tasted a single drop. From those years to nowadays, numbers have turned around: more and more people drink wine occasionally to socialize, while only a few still drink this red elixir every day as a habit in France.

As for consumption per capita, the amount consumed has also decreased over the years. In 2003, the consumption of wine was 69.5 liters per person, compared to 46 liters in 2020, although 2017 gave some propulsion and that year wine consumption reached 53.9 liters per capita. Nevertheless, the French have always used a great part of their home budget to buy wine; around 120 euros were spent annually. And most importantly, French customers prefer to invest in good quality: around 5,800 French consumers spent between 9 and 12 euros in 2020 on a bottle of wine, while around 2,400 spent less than six euros.

When speaking about quality, two acronyms should be mentioned. SIG, which stands for Sans Indication Géografique and designates wine without a specific geographic origin, and AOP / PDO, which stands for Appellation d’Origine Protégée (Protected Designation of Origin) and covers all kinds of quality wine and with a specific origin. When it comes to price, the difference is also apparent. On average, a liter of SIG wine costs two euros, while the price of a liter of PDO wine can go up to five euros. In recent years, the amount of PDO wine bought in specialized stores has been approximately 20 liters per household.

It is also true that each French consumer might have a particular taste for a specific wine, depending on how old they are, which region they come from or how much money they earn, but it is also clear that the winner among all of them is red wine.
And what happens if we compare wine to beer in a country such as France? As of 2021, beer wins the battle by a very small margin, an unexpected win compared to the previous year.
This text provides general information. Statista assumes no liability for the information given being complete or correct. Due to varying update cycles, statistics can display more up-to-date data than referenced in the text.

Eloise Trenda
Research Expert covering global food topics with a focus on the French, Spanish, and LATAM markets
Get in touch with us now
Published by Eloise Trenda, Jun 30, 2022

Wine sales value in hypermarkets and supermarkets in France 2003-2020

Consumption of wine per capita in France
46 L

Yearly wine consumption per capita in France from 2003 to 2020 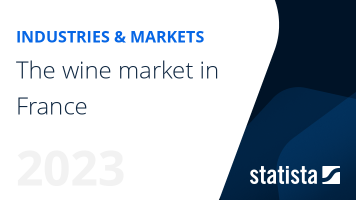 Go to report The wine market in France
Top Seller

The most important key figures provide you with a compact summary of the topic of "Wine in France" and take you straight to the corresponding statistics.