Pork is the name used for the food products derived from pigs. It is a variety of red meat which can be cut into roasts, steaks or, chops. Popular processed pork products include bacon, ham, and sausages. In Canada, the average retail price for one kilogram of pork chops was 12.52 Canadian dollars in February 2022. Many other pork products have increased in price recently, such as wieners and bacon.

Nearly 50 percent of Canadians consume meat or meat containing products daily, regardless of rising prices. But 2022 pork consumption was estimated at the lowest rate of the last 40 years; A large decrease from 1980, when per capita consumption was measured over 32 kilograms. According to a recent survey, it was revealed that over one third of Canadians would consider reducing their consumption of meat in the near future. It is likely that the downward trend in meat consumption will continue in coming years.

Even so, pork production has remained strong and in 2021, around 2.3 million metric tons of pork were produced in Canada. A forecasted 1.47 million metric tons of pork were exported in 2022. As of December 2021, there were over 1,550 hog and pig farming businesses across Canada. The eastern province of Quebec was home to most of these businesses at that time.
This text provides general information. Statista assumes no liability for the information given being complete or correct. Due to varying update cycles, statistics can display more up-to-date data than referenced in the text. 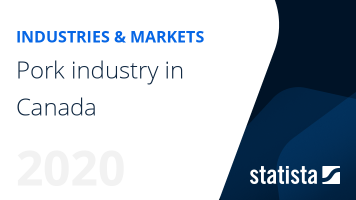 The most important key figures provide you with a compact summary of the topic of "Pork industry in Canada" and take you straight to the corresponding statistics.