Of the nearly 27,000 food and beverage stores in Canada, over one third were Ontario. Loblaw Companies Ltd., with over 2,400 stores nationwide, had the largest number of stores among grocery retailers in Canada and generated about 37 billion Canadian dollars in food sales in 2021. Sobeys Inc. followed with more than 1,400 stores and sales reaching just over 28 billion dollars in the same year. Revenues from Costco, Walmart, and Metro, were not far behind with 27, 22, and 18 billion dollars, respectively.

In terms of food expenditure, those aged 14 to 18 appeared to spend the most, with an average of about 3,944 Canadian dollars per year. Both major grocery stores, such as Walmart or Costco, and traditional grocery stores, such as Sobeys, Loblaws, or Metro, were found to be among Canadian consumers’ preferred channels for grocery purchases. Some of the main motivations when choosing foods to buy included simple ingredients, absence of artificial ingredients, and local production. Lower price was also the most important consideration according to consumers when asked what was most important when shopping for food and beverages in grocery stores.

E-commerce retail sales have grown steadily in recent years in Canada and are expected to continue their growth path. However, the share of food and beverage sales in total Canadian e-retail sales still accounted for less than three percent of the market in 2021 and is predicted to plateau until at least 2025 due to the comparative growth of in-store sales. In view of this, the coronavirus pandemic has indeed brought a shift in consumption habits and a significant increase in online grocery sales, a trend observed across North America. A substantial percentage of Canadian online shoppers ordered groceries online more frequently from both national and local grocery retailers since the pandemic began. The most popular online retailers of groceries, beverages, and meal kits were Amazon and Walmart, with about 40 percent of consumers preferring those providers.

In the following 6 chapters, you will quickly find the 31 most important statistics relating to "Food retail in Canada". 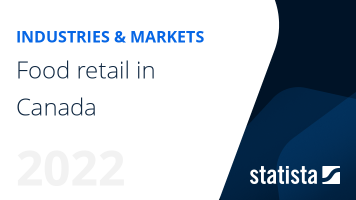 The most important key figures provide you with a compact summary of the topic of "Food retail in Canada" and take you straight to the corresponding statistics.