The food and beverage industry, which includes both food retail and processing sectors, is one of the largest and most competitive trades in Canada. In 2020, the three leading grocery retailers in Canada were Loblaw Companies Limited, Sobeys Inc. and Metro Inc. With 15,193 grocery stores in Canada, most of which located in the most populous regions of Ontario and Quebec, this segment plays a key role in the total of 26,526 food and beverage stores in the country.
In Canada, retail sales of supermarkets and other grocery stores amount to nearly 100 billion Canadian dollars. The three leading grocery retailers had a large presence with their numerous store locations throughout the Canadian territory. Loblaws for example had a total of 2,438 stores in 2021. Sobeys’s presence numbered more than a thousand stores through its various banners, while Metro, Inc. operated 1,612 stores . Although mostly drugstores, Metro was also relevant in the food retail industry in Canada with its 323 supermarkets. Among the leading retailers are also American supermarket chains Costco, and Walmart. With over one hundred warehouses across Canada, Costco, a membership-only warehouse club, saw a 22 percent growth in net sales in 2021.

Canadian consumers are faced with a wide variety of choices when it comes to where to purchase their groceries. A recent survey on where Canadians regularly purchase food and products for everyday use found that 87 percent of Canadians tend to shop at supermarkets. Despite the current growth in online grocery shopping, only about 17 percent of respondents appear to regularly purchase food and products through this channel. Among these, the preferred channel for online food purchases was traditional grocery stores that offer home delivery.
This text provides general information. Statista assumes no liability for the information given being complete or correct. Due to varying update cycles, statistics can display more up-to-date data than referenced in the text.

T. Ozbun
Research expert covering food retail and all food topics for Italy and Brazil
Get in touch with us now
Published by T. Ozbun, Mar 11, 2022

Sales of supermarkets and other grocery stores in Canada
99.64bn CAD

Number of grocery stores in Canada by employment size 2021 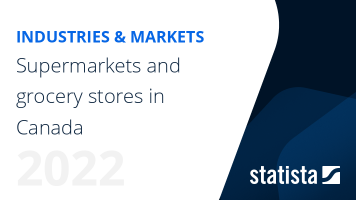 The most important key figures provide you with a compact summary of the topic of "Supermarkets and grocery stores in Canada" and take you straight to the corresponding statistics.