The changing eating habits of Koreans are heavily impacting the structure of the agricultural market. The consumption of grains or farming products including rice, the main crop in the country, has steadily decreased. Contrarily, meat consumption has increased greatly, and imports of meat have doubled during the last five years. Similarly, the meat market and the aquaculture product markets are growing overall.

The population involved in agriculture, forestry, and fishing has been shrinking steadily for years as the Korean economy shifted towards manufacturing and technology, producing automobiles, semiconductors, petroleum products, and so on. Most of the over one million agricultural households were working in the farming sector. The aging of the current agricultural population and the work’s lack of popularity among younger generations is directly affecting the industry. Almost half of all farmers are more than 65 years old which is the retirement age in South Korea, whereas in other industries only around 16 percent of workers were over 65 years old.

Are there further possibilities for the Korean agriculture industry?

Koreans today are showing greater concern about the food they consume. The sales value of organic food and beverage products was estimated to more than double over the last decade. According to one survey, the majority of South Korea consumers was willing to pay at least 25 percent more for organic food than conventionally grown products. In the near future, organic farming will be at the forefront of the food market.
Also, smart farming has suggested great possibilities for industry growth. The market size of smart farming was estimated to reach approximately 5.4 trillion won in 2020. Together with the government's efforts of exporting Korean smart farming models to other countries, the Korean agriculture industry is expected to experience steady growth.
This text provides general information. Statista assumes no liability for the information given being complete or correct. Due to varying update cycles, statistics can display more up-to-date data than referenced in the text.

Won So
Research expert covering South Korea
Get in touch with us now
Published by Won So, Jul 19, 2022 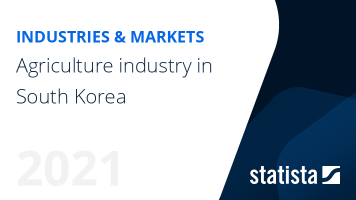 The most important key figures provide you with a compact summary of the topic of "Agriculture in South Korea" and take you straight to the corresponding statistics.