Published by
José Gabriel Navarro,
Jan 24, 2022
Since the late 2010s, pay TV has been experiencing a declining trend worldwide. But the segment may still find a plethora of expansion routes in Latin America. The subcontinent was among the regions with the lowest pay TV penetration rates in late 2020, only second to the Middle East and Africa. At that time, less than two out of five people in Latin America and the Caribbean accessed the service. And it is forecast that operators will increase that share. Contrary to the global tendency, it was estimated the number of pay TV subscribers in Latin America would grow by around 1.9 percent between 2021 and 2026.

Telenovelas at the top

Mexico is, by far, the largest pay TV market in Latin America, with about as many subscribers as Brazil and Colombia combined. Additionally, the North American country was forecast to have 20 million subscriptions by 2026. Yet Mexico saw its number of pay TV households decrease throughout the second half of the 2010s – arguably, as a result of the rise of streaming solutions such as Netflix and Disney+. Meanwhile, Mexican subscribers seem to turn to pay TV seeking a very specific type of entertainment. A single free-to-air channel broadcast all the five most-watched pay TV shows in Mexico during the last days of 2021 and the first days of 2022. It was Las Estrellas, run by the media conglomerate Televisa and famous for its telenovelas.

In 2021, there were around 14 million pay TV subscribers in Brazil. The number was forecast to oscillate in the following five years but always stand above the 2021 figure. In fact, an increase might have already started. In October 2021, the pay TV household penetration rate in Brazil surpassed 23.6 percent – the highest share since December 2018. Another Latin American media leviathan, Globo, is behind many of the most-viewed pay TV channels in Brazil. In October 2021, the top two were SporTV, focused on soccer and other sports, and Viva, dedicated to rerunning classic Globo hit shows.

In the following 6 chapters, you will quickly find the 40 most important statistics relating to "Pay TV in Latin America". 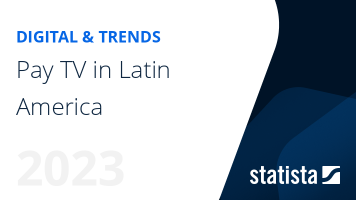 The most important key figures provide you with a compact summary of the topic of "Pay TV in Latin America" and take you straight to the corresponding statistics.