Pay TV, which refers to subscription-based cable or satellite television services, has long been one of the leading sources for news and entertainment worldwide. In recent years, however, the wave of technological advancements, over-the-top (OTT) video content, and online streaming services have challenged and transformed the global pay TV industry like never before. Global pay TV revenue dropped from 186 billion in 2019 to 161 billion U.S. dollars in 2021, and according to the latest projections, this downward trend is unlikely to reverse in light of the proliferation of on-demand content. But while the streaming revolution is visibly accelerating cord-cutting in mature digital markets, pay TV is thriving in other parts of the world. In 2021, the number of pay TV subscribers worldwide reached a record 1.01 billion, and moderate growth is forecast for at least another six years.

Has pay TV outlived its usefulness?

The pay TV industry faces significant challenges and competition in digitally developed markets such as Europe or North America. Fueled by the ever-increasing availability and affordability of OTT media and subscription video-on-demand (SVOD) services, viewers are gradually canceling their cable or satellite subscriptions in favor of more flexible video entertainment options. In effect, the number of pay TV subscribers in North America has steadily decreased over the past ten years, a downward trend that is particularly pronounced in the United States. The U.S. pay TV penetration rate fell from 87 to 71 percent over the past decade, bringing along sharp revenue declines and subscriber losses for pay TV providers nationwide. To combat subscriber churn, many pay TV providers consider the integration of OTT services into their service portfolios.

While a transition from linear TV to internet-based alternatives is well underway in some regions, audiences in emerging digital markets such as Latin America, Africa, and the Asia-Pacific region are still embracing the format. The number of pay TV subscribers in Latin America, for example, has remained mostly unchanged in recent years, with a moderate growth forecast for Mexico, Argentina, and Colombia alike. Arguably the most impactful market for global TV subscription and revenue growth is Asia: By 2027, the number of pay TV subscriptions in the Asia-Pacific region is set to reach a record 649 million, with China, India, and South Korea accounting for the largest share of subscriptions. While China has long trailed the United States for the highest pay TV penetration rates worldwide, smaller countries such as Indonesia experience the most rapid increase in pay TV adoption. What the future of linear television will look like in these and other markets will largely depend on broadcast innovation, digital inclusion, and the ever-increasing range of home entertainment options.
This text provides general information. Statista assumes no liability for the information given being complete or correct. Due to varying update cycles, statistics can display more up-to-date data than referenced in the text.

Julia Stoll
Research expert covering TV and video media
Get in touch with us now
Published by Julia Stoll, Nov 23, 2022 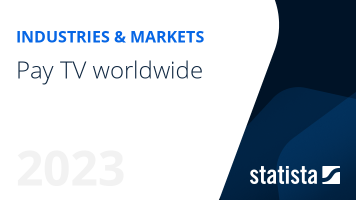 The most important key figures provide you with a compact summary of the topic of "Pay TV worldwide" and take you straight to the corresponding statistics.