Published by Statista Research Department, Sep 9, 2022
Singapore is considered an international telecommunications hub due to its highly developed network and progressive regulatory environment. With 14 telecom operators, the value added of the sector to the country's economy has been steadily increasing in recent years.

Singapore is one of the most connected countries and one of the most advanced information and communications technology (ICT) markets in the world. The growth of the sector is seen as a source of economic and social development, in line with the smart nation initiative. With its well-developed telecom infrastructure, Singapore has one of the fastest mobile internet speeds in the region, becoming the first country in the world to achieve nationwide 5G coverage. This connectivity is complemented by the fiber network operated by NetLink Trust. The next-generation national broadband network (NBN) aims to improve the economy’s competitiveness through ultra-high-speed broadband access nationwide. In the fiscal year 2022, Netlink NBN Trust's fiber-based end-user network reached approximately 1.46 million residential homes.

The four licensed telecom providers, Singtel, M1, StarHub, and TPG, were recently joined by other mobile virtual network operators (MVNOs) such as Circles.Life, MyRepublic, and Gorilla Mobile. The advent of lower-cost plans offered by the new players and incumbent telcos’ sub-brands, such as Singtel’s Gomo and StarHub’s Giga, have led more to seek new SIM-only and off-contract plans across multiple telcos. In the financial year 2022, the operating revenue of Singtel was valued at approximately 15.34 billion Singapore dollars. In comparison, StarHub's total revenue amounted to approximately 2.04 billion Singapore dollars in the financial year 2021.

A significant proportion of Singapore's population now has more than one mobile broadband account. The number of mobile-cellular subscriptions in Singapore reached its peak in 2019, with over nine million contracts. The high internet usage and further development of digitization were partly responsible for the increasing number of mobile subscriptions. In the fourth quarter of 2021, the average mobile data usage in Singapore amounted to 71.39 petabytes per month. Total 4G subscriptions in Singapore were at 7.97 million subscriptions in 2021. The mobile broadband market will be driven by the increasingly faster speeds offered by mobile operators as they roll out their 5G networks. Higher mobile connection speed can support the development of the internet of things (IoT), cloud gaming, autonomous driving, and other digital applications.

In the following 6 chapters, you will quickly find the 28 most important statistics relating to "Telecommunications industry in Singapore". 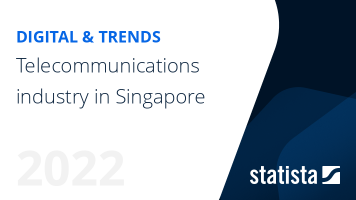 The most important key figures provide you with a compact summary of the topic of "Telecommunications industry in Singapore" and take you straight to the corresponding statistics.

Online video and entertainment in Singapore