Published by S. Lock, Feb 24, 2022
In the period from 2007 to 2017, the number of companies in the Norwegian restaurant industry grew slightly. At the same time, the number of enterprises in the domestic beverage serving industry increased overall. As of 2017, most restaurants and mobile food service companies, as well as beverage serving companies in Norway, had five to nine employees.
Together with the growing number of restaurants, the consumption expenditure of Norwegian households rose. In 2018, households spent approximately 98 billion Norwegian kroner on restaurants and hotels. That same year, consumers seemed to especially like Italian, Greek and Mexican restaurants.

Among the restaurant chains in the Scandinavian country, Egon restaurants are well-known. The company opened their first restaurant in 1984 and is owned today by Norrein AS. The concept is based on a high degree of self-service, where guests have to order and pay for all food and drinks themselves at the bar. Within three years, Egon’s revenue decreased by almost three billion Norwegian kroner, amounting to around 30 billion Norwegian kroner in 2018.

In addition, there is a popular Norwegian coffeehouse chain called Kaffebrenneriet. As of November 2019, by far most stores were located in the capital Oslo, where the chain was originally founded in 1994. The chain operates countrywide and has outlets in Trondheim and Fredrikstad, among other cities. Kaffebrenneriet's main business consists of the sale of coffee and other coffee-based drinks, but the chain also offers coffee beans, sweets and snacks to be purchased in the store.

In the following 5 chapters, you will quickly find the 27 most important statistics relating to "Restaurant industry in Norway". 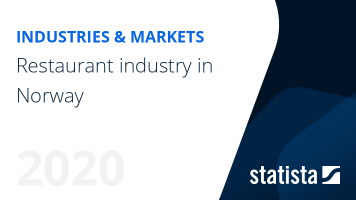 The most important key figures provide you with a compact summary of the topic of "Restaurant industry in Norway" and take you straight to the corresponding statistics.