Published by S. Lock, Feb 23, 2022
Pizza and Italian restaurants were among the most popular restaurant types in Great Britain in 2020. Pizza restaurants are also a prominent feature of the takeaway sector in the UK. In 2022, the market size of the pizza delivery and takeaway sector in the UK was forecast to exceed 3.4 billion British pounds. Domino’s Pizza is currently the leader of the UK pizza restaurant market. The nation is home to the largest international franchise of Domino’s Pizza - Domino’s Pizza Group. When asked in 2021, “Which of these online providers of restaurant and food delivery have you used in the past 12 months?” approximately 39 percent of Brits reported having used Domino’s. Meanwhile, 20 percent of Brits used Pizza Hut, and 16 percent used Papa John’s pizza.

What are the leading pizza restaurants in the UK?

Meanwhile, pizza and Italian cuisine is also a staple across the UK casual dining market. Included in this category are restaurants such as Pizza Express, Pizza Hut, and Prezzo to name a few. Another key player on the market is the Azzurri Group, the parent company of several Italian casual dining restaurants, including Zizzi and Ask Italian.

How big is the takeaway industry in the UK?

In 2021, the market size of the fast food and takeaway industry in the UK totaled 18.9 billion British pounds. By 2022, the market was forecast to reach 20.61 billion. Over a two-year period from 2019 to 2021, the average annual spend on takeaway food from restaurants in the UK increased by 42 percent. The most popular type of takeaway cuisine in Great Britain, according to a 2021 survey, was Chinese, with 25 percent of respondents stating that this was the case. Meanwhile, pizza ended up being the fourth most popular type of takeaway for Brits, right behind fish and chips.

In the following 5 chapters, you will quickly find the 22 most important statistics relating to "Pizza restaurants in the United Kingdom (UK)".

The most important key figures provide you with a compact summary of the topic of "Pizza restaurants in the United Kingdom (UK)" and take you straight to the corresponding statistics.

Restaurant delivery and takeaway in the United Kingdom (UK) 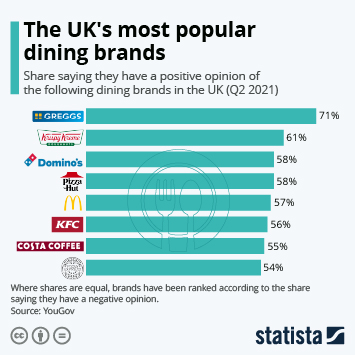