Published by N. Sönnichsen, Sep 12, 2022
Liquefied natural gas (LNG) is natural gas that has been cooled to around minus 162 degrees Celsius in order to ease transportation to consumer markets. When extracted, natural gas contains a mixture of methane, ethane, propane, and butane. The latter two are usually separated and stored at low pressure before being sold as liquified petroleum gas (LPG). LNG on the other hand is predominantly made up of methane and ethane. Treatment includes removing acid gases and components which would impair the liquifying process. Most LNG plants are located close to the sea for export trading via shipping vessels. The liquid is then regasified once it reaches its destination before entering pipeline distribution systems for end-user delivery. The global LNG trade volume reached over 500 billion cubic meters in 2021.

Advancements in hydraulic fracturing processes have made the United States the largest natural gas producer in the world. In 2016 Cheniere Energy became the first company to sell U.S.-sourced LNG to overseas customers. Since then, Cheniere has grown to become the second largest LNG exporting company, with a storage capacity of 35 million metric tons per annum. It is one of the smaller players in the export market as the industry is largely dominated by oil and gas supermajors and state-owned giants such as Qatar Petroleum. Qatar and Australia account for the greatest LNG export market share, with a combined share of over 40 percent.

Main importers and the potential for LNG growth in Europe

The countries most reliant on LNG imports are those where their remote location makes pipeline connections unfeasible. For many years, Japan and South Korea have been among the major LNG importing countries, while China's growth in import volumes has been more recent. The landed price of LNG in South Korea was 35.43 U.S. dollars per million British thermal units in October 2021, the highest in the world and significantly higher than in recent years as a result of a gas supply shortage.

Due to the vast network of pipelines connecting Russian gas producers and European consumers, LNG has so far only played a minor role in European trade. However, as the Russia-Ukraine war unfolded, many government leaders on the continent prioritized finding alternative means of acquiring natural gas. Due to its importance for many industrial manufacturing sectors and the generation of heat and electricity, gas is likely to remain a frequently used fuel type and LNG in Europe is likely to become a growing market.

In the following 5 chapters, you will quickly find the 27 most important statistics relating to "Global LNG industry".

The most important key figures provide you with a compact summary of the topic of "Global LNG industry" and take you straight to the corresponding statistics. 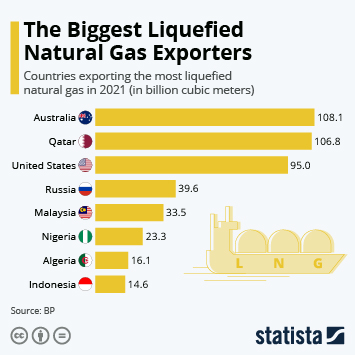 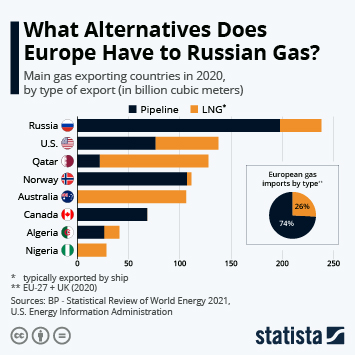 What Alternatives Does Europe Have to Russian Gas?