Bankruptcy in the U.S. - Statistics & Facts

Published by Statista Research Department, Aug 26, 2021
In the United States, bankruptcy refers to a legal process of debt relief for persons or businesses unable to repay their debts. The majority of bankruptcy cases are filed by individuals or spousal couples and relate to non-business debt. Such cases reached a high of just over two million in 2005, owing to a rush prior to the introduction of laws making it harder for individuals to file for bankruptcy. Cases again rose with the Great Recession of 2008/09, reaching around 1.5 million annually, but have since tapered off be around half that figure in 2020. The Great Recession also caused a spike in the number of business bankruptcy filings, which reached a peak of just over 60,000 in 2009. This spike included many of the largest business bankruptcies of all time, such as Lehman Brothers, Washington Mutual and General Motors -- with these three companies alone holding combined assets of over one trillion U.S. dollars at the time of filing. As with non-business cases, the number business bankruptcies have declined over the following years, falling to just under 23,000 in 2019.

The form of debt relief provided depends on the “chapter” of the Bankruptcy Code under which the case is filed. Chapter 7 bankruptcy is the most common, and involves the debtor’s assets being sold to repay as much of their outstanding debt as possible, with the remaining debt being cancelled. While Chapter 7 bankruptcy is available for both individuals and businesses, the vast majority of cases are for non-business debt. While Chapter 7 may be the best (or only) option for some, many insolvent debtors prefer to keep their assets and instead pay back the debt is over a longer period. Chapter 13 is the option typically available for individuals who want to do this, including the repayment of business debts for sole proprietorships. Under a Chapter 13 bankruptcy, debtors can arrange a three- to five-year repayment plan that replaces the previous terms of the loan/s. However, Chapter 13 bankruptcy is only possible to those with sufficient disposable income to service their debt over the extended period. Chapter 11 bankruptcy is similar to Chapter 13, but is used primarily for partnerships, corporations and sole traders with higher levels of income. Under Chapter 11 bankruptcy, the business continues to operate under a court-appointed trustee, and is reorganized in consultation with the court. This process can often lead to businesses turning their financial situation around, however this is not always the case.

The number of bankruptcy cases filed varies greatly between different states. While population certainly has a strong effect on the number of cases filed in each state, this is far from the only cause: States like Georgia and Ohio recorded more bankruptcy cases in 2020 than states with a higher population, like New York. Poverty is clearly one factor behind this difference, as states with a higher poverty rate, such as Mississippi, also tend to have a higher rate of personal bankruptcy. However, there are clearly other factors involved, as states like New Jersey have a low poverty rate but a relatively high number of bankruptcies. Given that the most commonly cited reasons for personal bankruptcy are income losses, medical expenses, and high mortgage payments, any explanation for the regional drivers of bankruptcy should also consider the effect of differing approaches towards healthcare, labor rights, and consumer protections.

Given that loss of income is a key driver of personal bankruptcy, the dramatic increase in unemployment caused by the coronavirus pandemic (COVID-19) suggests personal bankruptcy cases will also increase. Similarly, the trading restrictions enacted in the response to the pandemic, along with a general reduction in consumer confidence associated with rising economic uncertainty, makes an increase in business bankruptcies likely. However, the extent to which bankruptcy cases rise may be mitigated by factors like the level of government support provided, and how long the pandemic lasts.

In the following 4 chapters, you will quickly find the 17 most important statistics relating to "Bankruptcy in the U.S.".

Personal debt in the U.S. 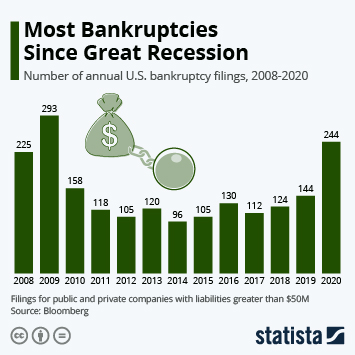 Most Bankruptcies Since Great Recession 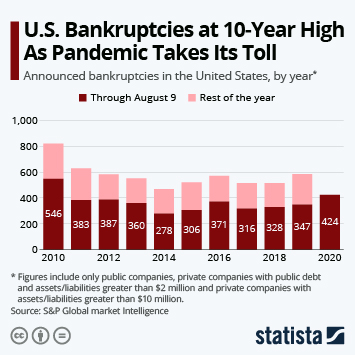 U.S. Bankruptcies at 10-Year High As Pandemic Takes Its Toll