Published by Statista Research Department, Aug 5, 2022
It is not always the case that companies can cover all their financial obligations with the liquid assets that they possess. Especially in crisis times this can be an issue, as the coronavirus (COVID-19) pandemic has shown. Companies need financial resources, among others, to cover the costs of running the business, fund their debts, modernize technologies, or to expand the activity to new products or markets. Especially large undertakings require huge financial injections and that is when the companies reach out for external financing.

Broadly speaking, there are two main types of corporate debt: loans and bonds. In case of a loan, a company borrows an agreed amount of money from a bank or other financial institution, with an agreed interest rate payable until the loan is fully repaid. In this sense corporate loans operate fundamentally in the same way as consumer loans. Importantly, loans cannot be openly traded on financial markets. Bonds can be thought of as a promise repay a fixed amount of money on a certain date that is sold to investors. Once issued by a company, bonds can then be openly traded on financial markets. The date for repayment is called the maturity date, with the company making regular interest payments to the bond owner until then. Generally, the interest rate is lower for bonds than loans. While bonds are the most common financing instrument in the United States, in China and the Euro area, the overwhelming majority of corporate debt is in the form of loans. Loans also comprise most of the private sector debt in low and middle income countries.

Value and quality of corporate debt

The growth of corporate debt levels since the Great Recession of 2009 is increasingly becoming a talking point among many analysts. The debt of global nonfinancial companies amounted to 81 trillion U.S. dollars in the third quarter of 2020 and exceeded the value of global GDP for the first time. Around 31 percent of this debt was held by companies in emerging markets – a figure that has been steadily increasing over the last decade, rising from around nine percent in 2008.
China is by far the largest issuer of corporate debt. The quality of Chinese debt decreased in the previous years. This was not the case for Japan, France, and Germany, where the share of “speculative” debt issued by nonfinancial companies fell over time. In the United States, 35.68 percent of the nonfinancial company debt was considered at risk in 2019, which was the highest value among other developed economies.

In the following 4 chapters, you will quickly find the 27 most important statistics relating to "Global corporate debt".

The most important key figures provide you with a compact summary of the topic of "Global corporate debt" and take you straight to the corresponding statistics. 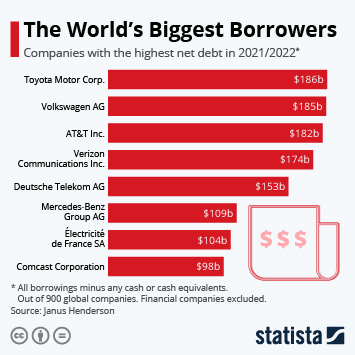 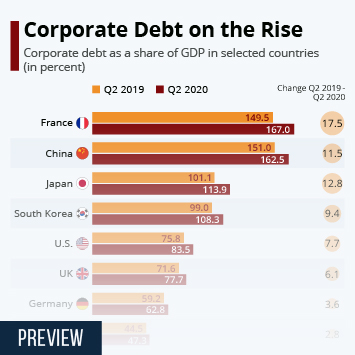 Corporate Debt on the Rise