Published by
Erick Burgueño Salas,
Aug 25, 2022
The United States has the world's second-largest air travel market, with more than 369 million passengers being transported in 2020. With all the passenger traffic, it is no surprise that the U.S. American passenger airlines are some of the world's largest, with United, Delta, and American Airlines being among the world's largest. Several factors explain the leading position of the U.S. market. First is the country's size in terms of geography, population, and economy. Combined with the lack of a high-speed passenger rail network, these three factors create a huge demand for domestic flights, with this often the only feasible option for long-distance trips. Second is the country's status as a hub for intercontinental travel. Not only do tourism and business travel create a high demand for intercontinental flights, but the U.S. is often a stopover destination for flights to other countries in the region.

Finally, regional carriers are those with operating revenue of below 100 million U.S. dollars and provide services to communities too small to justify the presence of a mainline carrier. The regional segment differs in that while the overall U.S. air travel industry has been growing, the number of regional airlines and passengers transported has declined. High operating costs, low demand, and the effects of the pilot shortage are the factors generally provided to explain this decline.

Impact of the COVID-19 pandemic on U.S. airlines

In the following 4 chapters, you will quickly find the 24 most important statistics relating to "Passenger airlines in the U.S".

The most important key figures provide you with a compact summary of the topic of "Passenger airlines in the U.S" and take you straight to the corresponding statistics.

Airline passenger experience in the U.S. 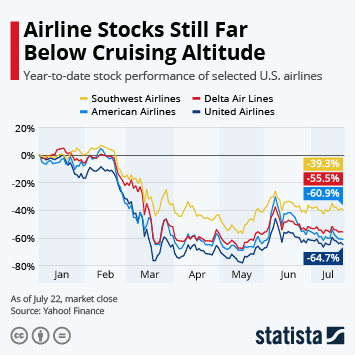 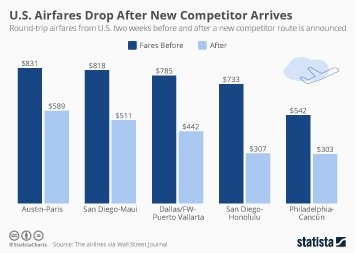