Published by
P. Smith,
Jan 12, 2022
New Look is one of the many fast fashion brands to have come out of the United Kingdom (UK) and found popularity with consumers worldwide. In fact, based on the company’s revenue figures, New Look ranked among the leading fast fashion brands in Europe in 2019. Yet since 2016, the retailer has been in financial dire straits with plummeting revenue figures. So much so, in fact, that in 2018 the company had to announce a company voluntary agreement (CVA), and financial restructuring plans were revealed in early 2019.

Since then several measures have been implemented by New Look in an attempt to achieve a turnaround. The retailer stopped all operations in China, and a number of UK retail stores was shut down, following which profits made a comeback from the negative figures of the previous year. While the loss of UK stores had a visible impact on the recovering profits, the brand’s e-commerce business, New Look’s most successful revenue stream, also made significant contributions.

New Look trades in an increasingly competitive fashion retail environment, where many relatively young brands such as Boohoo and PrettyLittleThing offer cheap and stylish clothing, and online marketplaces like ASOS are becoming increasingly popular with fashion shoppers. Data on consumers’ fashion brand searches online showed that while conventional high street retailers such as New Look, M&S, and Debenhams fell out of fashion, PrettyLittleThing and Boohoo were in the top three brand searches on Google.

With store closures and ailing sales, New Look is not alone in British high streets, where a number of retail companies have recently had similar fates. Many established names in UK high street retail, like Debenhams, House of Fraser, Mothercare, and Bath Store all went into administration. While House of Fraser was bought out by Sports Direct, and Bathstore was rescued by Homebase, Debenhams declared going into administration for the second time immediately following the coronavirus (COVID-19) crisis, and closed yet more stores. According to the most recent research, as of the end of 2020, there were close to nine thousand store closures due to cost-cutting measures in UK's retail industry. In contrast, 533 store closures happened due to announcing CVAs.

In the following 3 chapters, you will quickly find the 17 most important statistics relating to "New Look Group". 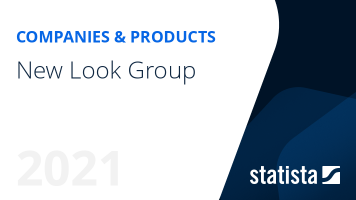 The most important key figures provide you with a compact summary of the topic of "New Look Group" and take you straight to the corresponding statistics.