Published by Jan Conway, May 23, 2022
The coronavirus (COVID-19) pandemic of 2020 had an impact on the UK craft beer industry. In April 2020, over eighty percent of independent brewers experienced falling sales and about the same share of those surveyed felt that government support for their businesses was inadequate. Luckily, things seem to be turning around for the industry. The number of independent breweries in the UK rose by 86 in 2021 to reach a total of 1,902.
While the American Brewers Association has exact and quantifiable definitions for what constitutes a craft brewery, it is not the same case in the UK. All the same, a brewer is considered to be a craft beer producer if the beer output is small and the brewery is independent. These two dimensions are also used by the American Brewers Association to define the term.

85 percent of UK beer drinkers still say they have a good or reasonable understanding of what the term means. At the same time, 31 percent of beer drinkers said the term 'craft beer' has become overused. The term microbrewery is often used interchangeably with the term craft brewery.

The India Pale Ale (IPA) is the second most popular beer category among UK consumers in 2020. This puts craft beer directly behind lager, which 71 percent of UK consumers drink. Male consumers favor IPAs more than female consumers. Among craft beers in the UK, BrewDog's IPA is the best-selling craft beer brand for both off-trade and on-trade markets.

In the following 5 chapters, you will quickly find the 27 most important statistics relating to "Craft beer in the UK".

Statistics on the topic
On-trade sales volume of craft beer in the UK in 2019
1,241k hl
Independent brewers experiening a drop in beer sales due to COVID-19 in April 2020
82%
Active microbreweries in the UK
1,852 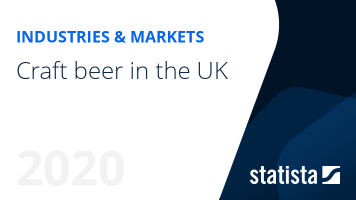 The most important key figures provide you with a compact summary of the topic of "Craft beer in the UK" and take you straight to the corresponding statistics.