Published by
Tanushree Basuroy,
Jan 31, 2022
The Republic of India is one of the world’s largest countries, with a yearly average population growth of one percent. As a developing market economy, the main sectors in India include agriculture, industries, and services. The agriculture sector had the largest share of employed individuals. In 2019, there were over 12 million workers in the country employed in factories.
Informal, unorganized migrant workers at the heart of Indian employment Much of the working population in the country belonged to the informal, unorganized sector that had the lowest income jobs. India has millions of migrant workers who move seasonally for prospective labor-intensive jobs that offer better pay than local employment. With no restriction on internal migration within the country, supported by the vast road and rail infrastructure many workers commute across districts for employment, sometimes even daily.

The organized sector, however, included workers employed at government offices or government-owned entities, state-owned enterprises, and the private sector. Regular jobs in the organized sector provided better job security and earnings, besides being protected by labor laws. Employment and retirement benefits included rent subsidies and medical allowances in addition to others, depending on the sector of work. Indian Railways and Indian Armed forces are among the largest employers in the world. However, a majority of the working labor are casual laborers and self-employed. To provide equal representation of disadvantaged sections in society in education, employment, and politics, the government has included reservations. While this was a contentious topic, many young Indians favored job reservations.

India’s employment crisis amidst the pandemic While most of the country is aware of the unemployment woes, wage disparity is seldom noticed among workers in general, followed by an obvious gender gap. The country in recent years has seen a decrease in labor force participation among females. The disparity was massive in executive positions, and to address gender diversity, “The Companies Act of 2013” mandated a certain class of companies to have at least one woman director on board. The essence of this mandate was lost when many companies circumvented this rule by appointing family members of the owners as women directors.

The country’s lockdown from the coronavirus (COVID-19) pandemic in March 2020 not only halted daily life, but also had a drastic impact on most economic activities, causing financial stress on many migrants and daily wage employees. A drop in India’s GDP forecasts as a result of COVID-19 was accompanied by business and commercial activities coming to a standstill, and many lost their jobs. Amidst this work-from-home became the new norm for many professionals. This made it clear that along with the economy, the pandemic created immediate and long-term disruption in employment, with all sections of society at stake.

In the following 6 chapters, you will quickly find the 35 most important statistics relating to "Employment in India".

The most important key figures provide you with a compact summary of the topic of "Employment in India" and take you straight to the corresponding statistics. 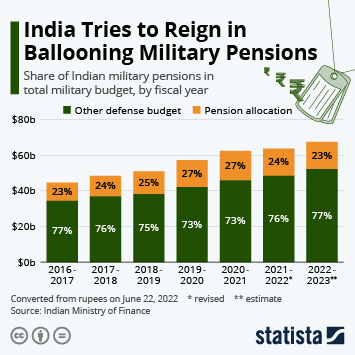 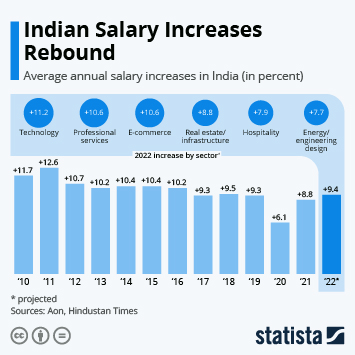