Published by
Madhumitha Jaganmohan,
Dec 7, 2021
Alongside Malta, Luxembourg, and the Netherlands, Belgium was one of the EU countries with the lowest energy consumption derived from renewable sources. In 2018, Belgium’s renewable consumption reached only 9.42 percent. Nonetheless, the European Union aims for around 20 percent of the energy consumed by the European population and companies to come from renewable sources in 2020. Therefore, for Belgium to reach its goal, the use of renewable energy should increase.
During the last few years, the production of renewable energy in Belgium has indeed increased. In 2018, over 3,6 thousand kilotons of oil equivalent of energy produced in the country were from renewable sources. Most of the country’s renewable power was generated by solid biofuel, wind power, and renewable municipal waste. Out of the total 3.6 thousand kilotons of renewable energy produced in Belgium, over 2,2 thousand were derived from one of these three sources. On the other hand, the production of renewable power derived from liquid biofuel or geothermal power was rather scarce in Belgium. In 2018, less than five kilotons of oil equivalent were generated by one of these renewable sources.

In the following 9 chapters, you will quickly find the 32 most important statistics relating to "Renewable energy in Belgium". 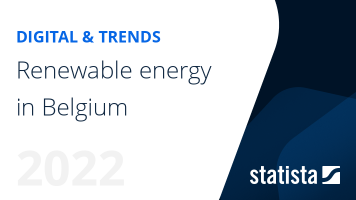 The most important key figures provide you with a compact summary of the topic of "Renewable energy in Belgium" and take you straight to the corresponding statistics.

Renewable energy in the UK

Renewable energy in the Netherlands