Published by
Madhumitha Jaganmohan,
Mar 14, 2022
In the past decades, the electricity output from renewables has increased rapidly in the United Kingdom. In summer 2019, the United Kingdom became the first large economy globally to enact a carbon neutrality law, which would see greenhouse gas emissions reduced to net-zero by 2050. To reach the said target, furthering the use of renewable energies is paramount.

While renewables provide nearly a third of the country's power, almost half of all this is generated by wind energy. Wind power experienced the highest growth rates, with both onshore and offshore wind farms generating over 32 terawatt-hours of electricity in 2019. By comparison, in 2000, the combined onshore and offshore wind power production amounted to 965 gigawatt-hours of electricity. The growth in energy production is also reflected in the number of renewable facilities. In 2019, renewable energy generation had seen an increase in its number of sites in many of its sources, totaling more than a million sites. Unsurprisingly, wind power plant capacity was 24 gigawatts and solar photovoltaic sites offered a cumulative capacity of 13.6 gigawatts in 2020.

Bioenergy is the second greatest contributor to renewable electricity generation after combined wind power, producing 39,311 gigawatt-hours by 2020. Bioenergy uses bio-based fuels that include power sourced from waste combustion, animal biomass, plant biomass, anaerobic digestion, and co-firing with fossil fuels, although the latter was nearly phased out by 2018. Both sewage gas and landfill gas are a form of bioenergy. In terms of utilization efficiency, sewage gas has the greatest load factor of all renewable sources in the UK. The annual average noted only slight fluctuations, between 41 and 49 percent. By comparison, figures for landfill gas declined from nearly 60 percent in 2010 to 37 percent by 2020, showing that peak demand for said energy source grew quicker than average consumption.

In the following 7 chapters, you will quickly find the 26 most important statistics relating to "Renewable energy in the UK ".

The most important key figures provide you with a compact summary of the topic of "Renewable energy in the UK " and take you straight to the corresponding statistics. 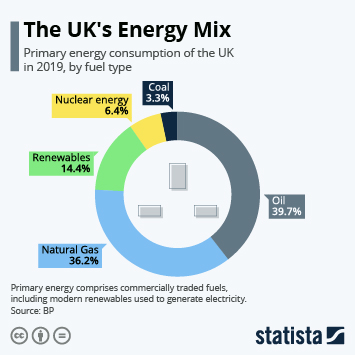