The Benelux has been influencing and shaping the beer industry for centuries. Internationally renowned breweries such as Stella Artois and Swinkels Famliy Brewers have been around since the middle ages, while beverage giants the likes of Heineken and Amstel dominate the global beer market today. However, while the large scale production and export of lager beer in the Netherlands and Belgium has garnered international fame and success, locals in these countries have been developing a more particular palate: a taste for unique craft beers.

The complex terminology surrounding craft beer in Europe warrants some clarification. First of all, ‘craft beer’ is not a very common term in the Benelux. Dutch and Dutch-speaking Belgian beer drinkers prefer to use the term speciaalbier (specialty beer) for any beer that has a higher alcohol percentage than pilsener (lager) and has a more pronounced taste. On the other hand, French-speaking Belgians and most people from Luxembourg would refer to these beverages as bière artisanale (artisanal beer). Secondly, there is no universal definition of the American term “craft beer”. Even the American Brewers Association, which has clear and quantifiable definitions for what constitutes a craft brewery, does not actually define what a craft beer is. As such, statistics take a somewhat liberal approach to the term, in accordance with local jargon.

Although the Netherlands, Belgium and Luxembourg form one geopolitical region, there are vast international differences when it comes to craft beer. In the Netherlands (especially the Randstad region, around Amsterdam), craft beer microbreweries are a recent phenomenon, as illustrated by the rapid emergence of new breweries in the last decade. These small scale breweries often use eye-catching names for non-standard beers aimed at tourists and (local) millennials. On the other hand, most Belgian craft breweries are highly traditional, often located at monasteries and brewed by actual monks using a strict brewing process and age-old recipes. The contrast could not be bigger. Finally, the newly emerging Luxembourgian craft beer industry could be classified as a melting pot of German, French and Belgian influences. The craft beer market in the Grand Duchy is still in its infancy, trying to find its place in the fusion of culturally driven taste preferences that define the European beer market.
This text provides general information. Statista assumes no liability for the information given being complete or correct. Due to varying update cycles, statistics can display more up-to-date data than referenced in the text.
Koen van Gelder
Research expert covering Tobacco and Meal Kits
Get in touch with us now
Published by Koen van Gelder, Aug 25, 2022

Number of active microbreweries in Luxembourg
10

Distribution of beer consumption in the Netherlands 2022, by beer type 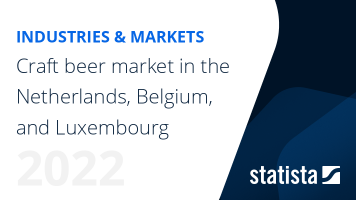 The most important key figures provide you with a compact summary of the topic of "Craft beer market in the Netherlands, Belgium and Luxembourg" and take you straight to the corresponding statistics.