Already brewed in Ancient Egypt, beer is one of the oldest alcoholic beverages in the world. Present on every continent, beer has, however, suffered competition from wine, the queen drink in France, which has relegated it to the back of the podium among the drinks most consumed in France. But in recent years beer has experienced a renaissance in France. Since 2010, the number of breweries on French territory has exploded. This rebirth has a name: craft beer.

A worldwide thirst for beer

Although craft beer has been present on the U.S. and UK markets since the 1970s, sales have not been enough to quench the thirst of all human beings. Historic brewers such as Stella Artois or Heineken are raking in billions of U.S. dollars in revenue worldwide. A newcomer to the beer market, China is increasingly interfering in the globalization of hop drinks, for which Chinese breweries are among the world's largest producers by volume.

The rebirth of beer in France

In France, BGI/Groupe Castel is the leading brewer. This group is taking advantage of the growing popularity of beer in France. For the first time since 2008, the beer industry exceeded 3 billion euros in production in 2017. Although consumption is lower than that of its European neighbours, France nevertheless stands out in the export of malt, the main ingredient in the manufacture of beer. France is one of the main exporters of beer malt worldwide, as it is one of the world's leading barley-producing countries.

Craft beers are beers produced by craft breweries or microbreweries in smaller quantities than "historical breweries". These craft beers often produce top fermentation beers, i.e. the yeasts used for ale transform sugar into alcohol at a higher temperature and tend to rise to the surface. The processing period is also shorter for this type of beer, which allows production in small quantities. These beers are ales, stout, porter and Trappist. In 2017, 39 percent of the French population stated they regularly consumed craft beer. And this rate rises to 46 percent for residents of the Grand-Est region.

France, soon to be a beer exporter?

So, is France soon going to be the land of beer? Not for the moment, as 26.5 million hectoliters of wine are still consumed in France, yet wine consumption is declining in contrast to beer.
This text provides general information. Statista assumes no liability for the information given being complete or correct. Due to varying update cycles, statistics can display more up-to-date data than referenced in the text.

Turnover in the manufacturing beer industry in France
2.9bn EUR

Turnover of beer manufacturing in France 2008-2019

Breweries and beer companies in France 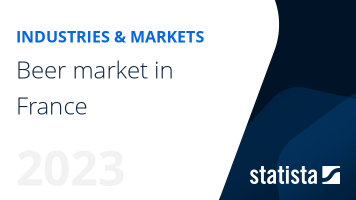 The most important key figures provide you with a compact summary of the topic of "Beer market in France" and take you straight to the corresponding statistics.