DIY crafts are activities undertaken when spending time at home to develop creativity and also to save money. While dealing with the restrictive measures following the coronavirus (COVID-19) pandemic, many people have found a pleasant way to overcome the isolation in DIY. According to a recent survey, gardening and home maintenance are the most popular activities Italians pursue when spending time at home. Bricolage and house decoration are other common DIY crafts people dedicated their spare time to. Specifically, over 30 percent of Italian respondents declared to carry out gardening work in their free time. Indeed, it is quite common to have outsdoor spaces such as a garden or a balcony in Italy.

Italians prefer to purchase bricolage, DIY, and gardening products in specialized stores close to their homes, as well as in specialized stores in shopping malls. However, the past and current health measures and the need to avoid crowded spaces seem to have influenced the purchasing habits of Italian consumers. Despite a very large share of respondents stating they did not plan to change the places where they do their DIY shopping, some stated that they intended to shop more online.

In the past years, the number of DIY and gardening stores in Italy increased, especially since 2015. Most of them are located in the northern regions, such as Lombardy, Veneto, and Emilia-Romagna. Lombardy, for instance, counts 179 garden, DIY, and agro-garden stores. The Italian retailer Brico OK had the largest number of stores in the country in 2021. That year, Brico OK had 111 stores nationwide. It also ranked fifth in terms of total retail surface, with around 182,450 square meters. Leroy Merlin, the French retailer operating worldwide, headed the ranking of the leading DIY and gardening stores with the largest cumulative retail surface. This retailer counted approximately 430,366 square meters of total retail surface.
This text provides general information. Statista assumes no liability for the information given being complete or correct. Due to varying update cycles, statistics can display more up-to-date data than referenced in the text.
Tugba Sabanoglu
Research lead covering Non-food CG & Retail
Get in touch with us now
Published by Tugba Sabanoglu, Nov 17, 2022

Number of DIY and gardening stores in Italy
812

Italy: leading DIY and gardening retailers in 2021, by retail surface 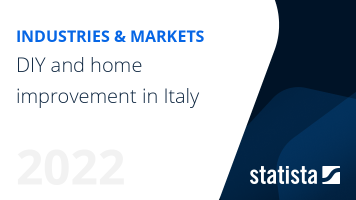 The most important key figures provide you with a compact summary of the topic of "DIY and home improvement in Italy" and take you straight to the corresponding statistics.