Published by Statista Research Department, Oct 10, 2022
In the past years, the Russian construction industry faced such challenges as increasing material costs and fluctuating commissioning growth rates, along with coronavirus-related setbacks. Nonetheless, the market, dominated by private organizations in terms of the volume of construction works, kept growing despite the adversity. Furthermore, Russia was the third-leading importer of construction worldwide after the European Union (EU) and China.

Impact of the war in Ukraine on construction in Russia

In response to the Russia-Ukraine war in 2022, Western countries imposed export restrictions on some construction materials to Russia, while several foreign companies, such as the Finnish elevator manufacturer Kone, suspended operations in the country. Russia heavily depended on imports of several building materials. For example, in 2021, nine out of ten escalators in Russia were imported. Furthermore, Russian imports of construction machinery saw an increase in recent years, with the exception of 2020. Russian construction companies were expected to switch to domestic alternatives and imports from Asia and the Middle East, while investment in construction projects nationwide was projected to decrease due to the sanctions as well as an increase in material prices.

Nearly 93 million square meters of housing were built in Russia in 2021. That year marked the first time the amount of commissioned individual houses exceeded that of apartment blocks. Overall, the volume of residential construction grew by over 38 percent in Russia in the first half of 2022 compared to the corresponding period of the previous year, with the highest increase recorded in the Southern Federal District.

The city of Moscow accounted for the largest area of multi-apartment residential buildings construction, followed by the Moscow Oblast and Saint Petersburg. PIK Group, which mainly focuses on comfort-class housing projects located in Moscow, was the leading apartment building developer by area under construction, followed by Saint Petersburg-based LSR Group. The average housing construction cost in the country has been growing year-over-year, exceeding 49 thousand Russian rubles per square meter in 2021.

In the following 5 chapters, you will quickly find the 31 most important statistics relating to "Construction industry in Russia ". 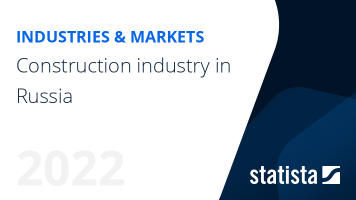 The most important key figures provide you with a compact summary of the topic of "Construction industry in Russia " and take you straight to the corresponding statistics.

Construction materials industry in the U.S.