The home ownership rate in Russia has been among the highest in Europe over the past years. Currently, Russia's real estate market is facing a decline in demand for new properties due to rising consumer prices. Therefore, the government provides financial support for mortgages. In July 2022, the average weighted mortgage loan interest rate was below seven percent. At the same time, as some international companies and foreign citizens left Russia during the invasion of Ukraine, the properties they rented became available. As a result, the vacancy rate in shopping centers in Moscow and other cities decreased in the first quarter of 2022.

The highest average selling prices in the housing market were reported in the resort area Krasnaya Polyana at over 325.6 thousand Russian rubles per square meter in December 2021. Moscow was a close second with an average selling price exceeding 293 thousand Russian rubles per square meter in May 2022. However, in the most expensive district of the capital, Ostozhenka, the square meter price was nearly 80 percent above the city average. Interestingly, Moscow did not lead the ranking of the cities with the highest residential rent, but it rather made it in the fourth place in May 2022.

The Russian capital had one of the highest prime headline office rents in Europe. In the first six months of 2022, the average prime rental price for offices in Moscow amounted to 22.4 thousand Russian rubles per square meter. Most international companies that operated in Russia had a presence in Moscow. Furthermore, foreign businesses usually rented the most expensive properties in the city. The vacancy rate of commercial office real estate in the city was below eight percent in 2021, having decreased from the previous year. The segment of co-working spaces, which was positively impacted by the COVID-19, grew steadily in the capital and in other large cities across the country.

The foreign direct investment flow in the Russian real estate market has increased by 57 percent in 2021. However, the figures were still below 2014 levels, when the volume of investment reached around 7.7 billion U.S. dollars. Moscow remains the main hub in the market, retaining nearly half of the total investment volume in the country. In the commercial real estate segment, the largest share of investment came from developers.
This text provides general information. Statista assumes no liability for the information given being complete or correct. Due to varying update cycles, statistics can display more up-to-date data than referenced in the text.
Published by Statista Research Department, Sep 19, 2022

Leading banks by volume of issued mortgages Russia in 2020 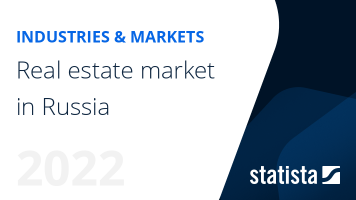 The most important key figures provide you with a compact summary of the topic of "Real estate market in Russia " and take you straight to the corresponding statistics.