In Italy, the fish and seafood industry counts more than four hundred enterprises, and the gross value added of the fishery sector has reached almost one billion euros. A variety of fish and seafood is reported in annual landings, mostly sardines, anchovies, and mussels. Italy exports its fish products mainly to western European countries, especially to Germany. In 2019, the value of German imports of Italian fish was double the value of imports reported by Spain and Greece, second and third importers, respectively. On the other hand, Spain was the main supplier of fish imports for Italy.
Since 2017, average spending on seafood products has increased among Italian households. Unsurprisingly, 85 percent of individuals stated in a survey they bought fish at least once a month and roughly one in two respondents used to buy fish about once a week. Moreover, fish consumption tends to peak over the month of December, with fish often being on the Christmas dinner menu. Looking at domestic consumption, mussels and seabreams are the most popular. Italian people consume frozen fish, as well. Ready-to-cook fish registered increasing sales revenue and average prices in 2019, if compared to the previous year.

As shown by survey data, Italian consumers are well aware that overfishing can put marine life at risk and would mostly support a stricter ban on catching endangered fish species. Additionally, retail consumers considered freshness and safety of the fish purchased the most important factors when making shopping decisions.
This text provides general information. Statista assumes no liability for the information given being complete or correct. Due to varying update cycles, statistics can display more up-to-date data than referenced in the text.

T. Ozbun
Research expert covering food retail and all food topics for Italy and Brazil
Get in touch with us now
Published by T. Ozbun, Aug 5, 2022 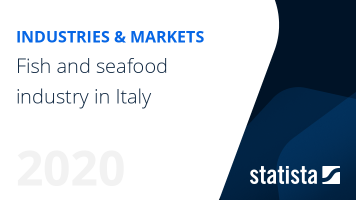 The most important key figures provide you with a compact summary of the topic of "Fish and seafood industry in Italy" and take you straight to the corresponding statistics.