Vaccinations are fundamentally the most cost-effective and scientifically proven, sound interventions relative to disease prevention. While most medicines are administered to cure a disease or relieve its symptoms, vaccines are administered to prevent diseases. It specifically targets infants, children and pregnant women who are susceptible to contracting diseases. In effect, vaccines contain the identical germs that cause the disease. However, since they have been clinically weakened, they are not potent enough to make one sick, but rather, they simulate an immune response that produces antibodies exactly like it when exposed to the agents that cause the disease.
Part of the sustainable developmental goals framed by the United Nations in 2015 urges India as a developing country, to focus on vaccine-preventable diseases by providing universal healthcare access including safe vaccines by 2030. Then the health of a country is directly correlated to its economic development. To accelerate this, the government of India launched the Intensified Mission Indradhanush in 2017, which aimed at improving vaccination coverage to over 90 percent for every child up to the age of two years along with pregnant women in identified regions where they were left uncovered under the routine immunization program.

A child is considered fully immunized when they receive four vaccines - against tuberculosis (BCG), three doses of diphtheria, pertussis and tetanus (DTP), three doses of poliomyelitis (polio), and one dose of measles vaccine by the age of 12 months. Despite these endeavors, one-third of all children in India remain unvaccinated. In addition, according to studies carried out, significant gaps were found not just in wealth-related immunization coverage, but more, inequalities related to gender and rural-urban coverage as well. Despite the fact that immunization coverage in India has substantially increased over the last two decades, a large proportion of children still remain unimmunized. Government and donor-funded programs have consistently endeavored to improve childhood vaccination. However regional disparities, specifically in the north-eastern, northern, and central parts remain a constraint.

Efforts are currently being made to incentivize and adopt alternative ways of bringing mothers and children living in the remoter rural regions of the country to health care facilities. Studies suggest that there exists a positive correlation between the number of institutional deliveries, birth registrations, possession of a mother-child protection card and childhood immunizations. A mother’s exposure to a heath care facility and her level of education positively influence the probability of childhood vaccination. Beneficiaries availing maternal-child care services including Anganwadi services which are sponsored by the central government can be identified on the basis of the Aadhaar card. Scientific studies and surveys undertaken in the field of vaccination coverage show that systematic methodological rigor is needed to improve coverage in a country as vast and diverse like India.

While many countries across the globe struggle to gain access to COVID-19 vaccines, ironically, India, one of the world’s largest vaccine manufacturer's and distributor's is victim to this challenge. Despite the fact, that more than half of India’s population eligible for the vaccine has received at least one dose, India still has a long way to go until full vaccination coverage is achieved. Amid severe vaccine shortages and an expected third wave at the precipice, the civil battle for vaccines between the center and states continue.
This text provides general information. Statista assumes no liability for the information given being complete or correct. Due to varying update cycles, statistics can display more up-to-date data than referenced in the text.
Sanyukta Kanwal
Research expert covering India
Get in touch with us now
Published by Sanyukta Kanwal, Sep 14, 2022 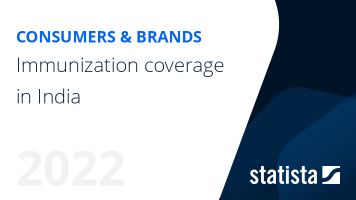 The most important key figures provide you with a compact summary of the topic of "Immunization coverage in India" and take you straight to the corresponding statistics.