The hotel industry in China has grown steadily in size and revenue over the past decade with the total number of hotel accommodations surpassing 250 thousand in China. The industry offers a wide variety of accommodation options spanning from budget inns to luxury resorts. In 2021, China recorded nearly nine thousand star-rated hotels, most of them located in tourist cities and holiday destinations.

The domestic hotel industry in China

The hotel industry is one of the first industries opened up to foreign investment in China. Shortly after the economic reform of 1978, several joint-venture hotels appeared in larger cities like Beijing and Guangzhou. By the 1990s, the domestic hotel industry began to soar. Despite ongoing foreign investment, more than 95 percent of hotels in China remain domestic-invested. The share is even higher among middle- and lower-range hotels.
Headquartered in Shanghai, Jin Jiang International is the largest domestic hotel group in China, in terms of hotel numbers. Targeted at budget travelers, the majority of Jin Jiang hotels are select-service hotels. In 2019, Shanghai Jin Jiang International generated almost 21 billion yuan in revenue, earning it a place in the Chinese Fortune 500.
Resulting from the increasing interest in outbound tourism in China, Chinese hotels expanded rapidly to well-known vacation destinations, such as Southeast Asia and Europe. Apart from revenues, the globalization of Chinese hotels also brought more opportunities to establish their reputation among international tourists.

Along with the prevalence of smart devices and digital payments, China's online hotel booking business thrived in the past decade. China's online hotel booking market was dominated by several leading platforms. The local service leader Meituan reaped more than half of the online booking market in China, followed by Trip.com. In the beginning of 2021, China had more than 14 million monthly active online accommodation booking service users, including hotels and short-term rentals.
The online short-term accommodation rental business has been gaining popularity among younger Chinese tourists. Compared to the traditional hotel service, short-term rentals offer guests more flexibility and the chance to engage with locals. In 2020, more than 450 thousand hosts in China provided around three million properties online as vacation rentals.
This text provides general information. Statista assumes no liability for the information given being complete or correct. Due to varying update cycles, statistics can display more up-to-date data than referenced in the text.

Yihan Ma
Research expert covering e-commerce and FMCG in Greater China
Get in touch with us now
Published by Yihan Ma, Dec 9, 2022

Revenue of hotels above designated size in China 2006-2021

Number of hotel accommodations in China
252399

Number of accommodation establishments in China 2022, by type 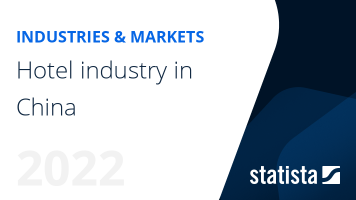 The most important key figures provide you with a compact summary of the topic of "Hotel industry in China" and take you straight to the corresponding statistics.

Short-term rentals and other accommodation