Published by Statista Research Department, Jun 21, 2022
Metropolitan refers to a characteristic of an urban metropolis or its inhabitants. These areas are densely populated and full of diverse people. Metropolitan areas tend to be large, densely populated, and host a multitude of business opportunities. These areas often cover multiple regions or jurisdictions, and sometimes even multiple cities due to their size and growth rate. Therefore, metropolitan statistical areas are usually named after their areas or the cities of which they consist. For example, one of the largest metropolitan statistical areas is the densely populated New York-Newark-Jersey City metro area, which spans not only through multiple cities, but through three different states as well.

Living in a metro area

Areas with such large and growing populations naturally attract a lot of business and chances for employment through a variety of industries. This in turn leads to a growth in population as more people will flock to the areas that may pay the most. However, no city or metropolitan area can provide all of its inhabitants with a steady source of income. In fact, many metropolitan areas in the United States are plagued with high rates of unemployment.

Another negative of living in a metropolitan area is the exposure to a higher rate of crime. With such high populations, and large amounts of unemployed people, many feel forced to turn to crime to supplement their income in these places. Crimes like robbery can be seen frequently in some of the largest metro areas of the United States. However, many of the crimes that populate metro areas are more violent in nature. The Anchorage, Alaska metropolitan statistical area for example, has one of the highest rates of violent crime in the United States.

Unfortunately, metropolitan areas have endured hard times during the COVID-19 outbreak of 2020. Areas with dense populations such as these are hotbeds for the spread of the virus. Many workers in metro areas were forced to work in conditions considered high risk, while many others lost their jobs altogether. In fact, the increased levels of unemployment and lowered income led to new highs in loan and mortgage delinquencies throughout the metro statistical zones. In response to these dangerous times and conditions, many switched to remote work in the hopes that working from home will help stop the spread of the virus.

In the following 5 chapters, you will quickly find the 27 most important statistics relating to "Metropolitan areas in the U.S.".

The most important key figures provide you with a compact summary of the topic of "Metropolitan areas in the U.S." and take you straight to the corresponding statistics.

Remote work in the U.S. 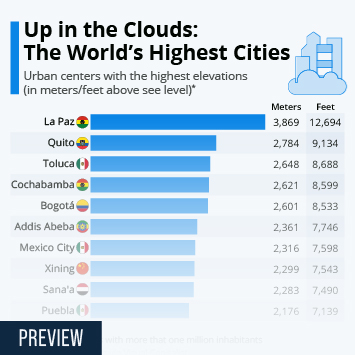