The phrase “fake news” has become somewhat of a buzzword over the past few years in the media industry. Defined as false or misleading information, often for advertising purposes or for damaging the reputation of a targeted institution, group or person, understanding fake news is vital at a time when access to reliable information is an increasingly important issue.
The fake news phenomenon is particularly important in the digital age, even more so as the number of digital news sources is ramping up. Content can rapidly become viral on social networks and thus increase traffic. While information circulates more freely and quicker than ever, it is still difficult to ensure its reliability.

News consumption has drastically evolved as more and more French people turn to digital newspapers, and print media distribution is losing steam. Sharing an article is instantaneous and just a few clicks away via social media, making it the ideal platform for the proliferation of misleading news. Almost half of internet users declared spotting fake news at least once every week their social media feed, and 13 percent about once a month. As a result, social media was the least trusted among news sources by French consumers.

The hunt for reliable information is thus proving more difficult than ever, and the public must be resourceful in order to gather credible factual data. More than half of young Internet users reported that they had already been fooled by fake news. Nearly a third of French people said they had unknowingly relayed a rumor or information that turned out to be false about current political events.

Politics remain a major issue in the phenomenon of fake news, both as a source or target of false information. Almost 60 percent of French people believed that the media they consult the most have reported false information about the coronavirus outbreak. Among the many fake news spread on social media about the pandemic, the most popular one was that 5G waves were responsible for the outbreak. More recently, about the same share of people were convinced that the Russia-Ukraine war was also targeted by fake news.
This text provides general information. Statista assumes no liability for the information given being complete or correct. Due to varying update cycles, statistics can display more up-to-date data than referenced in the text.
Published by Statista Research Department, Mar 23, 2022

Spotting fake news on social media in France 2021, by frequency 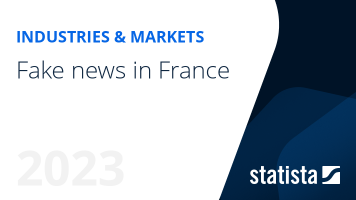 The most important key figures provide you with a compact summary of the topic of "Fake news in France" and take you straight to the corresponding statistics.

Share of internet users already been fooled by fake news