Over 70 percent of Europeans regularly encounter fake news. The frequency with which we encounter fake news and its potential to influence the way we think, how we vote, and what we believe, has made it an important issue in society today. The publishing and sharing of fake news has become easier in an increasingly digital world, and social media plays a large part in this.

The impact of fake news

Fake news can take the form of misinformation and disinformation. The latter is the deliberate spreading of false information to deceive an audience, while misinformation can be unintentional. Whilst disinformation is particularly worrying, both forms of fake news are problematic because many Europeans are unable to tell whether a story is real or false.

This has led to a lack of trust in the media; less than 40 percent of consumers in several European countries felt that the media could be trusted most of the time. Additionally, a clear majority of citizens in each EU member agree that fake news is a problem for democracy.

Information about certain topics is more susceptible to being skewed or misrepresented than others. For example, an analysis found that close to 60 percent of misinformation posts recommended by Instagram over a two-month period contained content about COVID-19. In fact, the coronavirus was the news topic most subject to false information in Europe according to a survey in early 2022. Additionally, almost 35 percent of European consumers reported witnessing false information about politics, and around 20 percent said the same about celebrities, immigration, and climate change respectively.

Fake celebrity news can be harmful to the individual in question (and their reputation) and is a problem which should be taken seriously. Meanwhile, false information about major health, political, and environmental issues has the potential to mislead the public on a huge scale, and can influence not only citizen’s opinions, but also their behavior and decisions. This can be avoided if consumers aim to be savvy in their news consumption, but identifying fake news is challenging for many, and can be time-consuming and frustrating. Most Europeans also believe that the problem of fake news will get worse in years to come, and additional pressure on audiences to decipher fact from fiction in the content they read will likely cause media trust to deteriorate.
This text provides general information. Statista assumes no liability for the information given being complete or correct. Due to varying update cycles, statistics can display more up-to-date data than referenced in the text.

EU state where fake news is seen most frequently
Malta

Consumers often seeing fake news in the EU 2022, by country

Consumers who have seen manipulated/doctored content online in Europe
18.4%

Consumers often seeing fake news in the EU 2022, by country

Ease of identifying fake news in the EU 2022 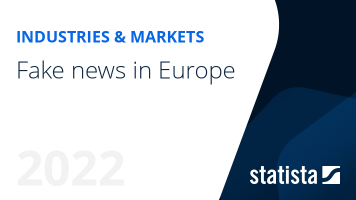 The most important key figures provide you with a compact summary of the topic of "Fake news in Europe" and take you straight to the corresponding statistics.