In a post-truth era, the contagion of fake news has gripped the world in equal parts. Right from the United states of America, to emerging economies like India, Brazil and others, no one seems to be spared. Deeply interlinked with technological developments, “disinformation” and “misinformation” have become pervasive in our news bubbles. As the world’s largest democracy with the second largest population, the issue of fake news poses a unique threat in India. Not only do the low literacy rates make it hard to implement the true spirit of democratic decision-making, but add to that an explosion of fake news and divisive propaganda, and there looms a real threat to the country’s democratic fabric itself.
A 2019 survey showed that a whopping 88 percent of the first-time voters across India agreed that fake news was a real problem. But disinformation is not a new phenomenon in the Indian political realm. What is worrisome is the multitude of platforms including print, television and social media whereby unverified information can reach even the most critical thinkers. To make matters worse, multiple surveys and studies in recent years found that an overwhelming majority of people in the country access news primarily through social media where information rarely gets checked for validity and authenticity. And being the largest market for WhatsApp with more than 300 million users, India is also the place where users forward more content than anywhere else in the world. Unfortunately, studies reveal that most Indians tend to trust messages from family and friends. This means that content gets forwarded without any checks, further driving misinformation in the social sphere.

Even though fact checking initiatives are popping up on several media fronts in the country, nearly 45 percent of respondents in a 2018 survey stated that they were not aware of any fact checking organizations. Moreover, the question of who should be held accountable for the menace of fake news is still unclear. Is it the government? Is it the people who create and forward false messages? Is it technology platforms like Facebook that allow populist posts to go viral for profits? Or is it the news media that fails to conduct basic fact-checks to remain the fourth pillar of democracy? In retrospect, the responsibility probably lies with everyone. Finland has set up measures to educate its citizens from all age groups on how not to fall victim to fake news. Perhaps, it is time that other governments also followed suite.
This text provides general information. Statista assumes no liability for the information given being complete or correct. Due to varying update cycles, statistics can display more up-to-date data than referenced in the text.
Tanushree Basuroy
Research expert covering India
Get in touch with us now
Published by Tanushree Basuroy, Apr 6, 2022

Most trusted news source in 2018
Newspapers

Trustworthiness of news source among Indians 2018

Exposure to fake news in India 2019

Concerns about fake news in India 2019 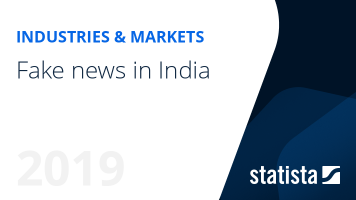 The most important key figures provide you with a compact summary of the topic of "Fake news in India" and take you straight to the corresponding statistics.