The United States is well underway establishing the national 5G network, laying the foundation for the rollout of the next primary mobile broadband standard. With 5G peak data rates up 20 times faster than 4G, and a network connection density ten times greater than that of 4G, 5G opens significant opportunities for innovation and economic development, and an improved consumer experience.

The improved connection density, faster data rate, and lower latencies that 5G brings will open economic opportunities across many major industry sectors, including retail, agriculture, manufacturing, health care, and the utilities sector. By supporting networks that can reliably perform complex tasks at rapid speeds, 5G will diminish the limitations that 4G imposes on edge computing, artificial intelligence, and the Internet of Things (IoT), allowing for more profound and efficient use of these technologies.

5G devices are coming on to the market at a steady rate, including recent flagship phones from Samsung and Apple. 5G functionality is striking a chord with consumers, with 79 percent of respondents to a recent survey saying that 5G was a consideration of some importance when deciding whether or not to upgrade to an iPhone 12.

5G smartphones grew their market share in the United States throughout 2020, climbing from 3.3 percent in January 2020, to 13.5 percent by August. By the end of 2021, 5G smartphones were forecast account for 17 percent of all smartphones sold in North America.

As demand grows, the average selling price has come down, making the phones a more affordable option. During the second quarter of 2019, the 5G smartphone average selling price came in at 1,075 U.S. dollars, a figure that fell to 730 U.S. dollars by July 2020. As 5G coverage expands and the potential market size becomes greater, it is likely that prices of 5G phones will continue to fall.

The use of 5G spectrum in the United States is controlled by the Federal Communications Commission (FCC). The FCC is in the process of auctioning off licenses in these valuable spectrum ranges, with ‘Auction 110’ recently raising 22 billion U.S. dollars.

AT&T made the largest declared purchase of any major telco at Auction 110. The company bid 9.1 billion U.S. dollars on 1,624 licenses for the 3.45GHz band.

5G speeds in the United States

5G data rates can vary greatly, influenced by factors such as the frequency used by an operator, distance from a base station, and physical obstructions. Real-world tests demonstrate the variable experiences, with 5G tests in five U.S. cities recently obtaining speeds ranging from 44.8 megabits per second (Mbps) to 83.8 Mbps.

Tests using millimeter wave (mmWave) 5G, a band of spectrum at which speeds are faster, but range is severely limited, yielded much faster downloads. Verizon achieved an average download speed of 437.5 Mbps across mmWave in five U.S. cities, and an average upload speed of 27.1 Mbps.

At a political and commercial level, getting the 5G strategy right is essential in maintaining a competitive edge. As opportunities become available, those who make the best use of them will gain a significant competitive advantage, with substantial economic gains on the table.

For consumers, the decline in average device price and increase in coverage means that 5G will continue to become a more attractive option when purchasing a new smartphone. The take-up level of 5G is expected to increase dramatically, growing from a base of around 14.42 million subscriptions in 2020 to reach 411 million subscriptions by 2027.
This text provides general information. Statista assumes no liability for the information given being complete or correct. Due to varying update cycles, statistics can display more up-to-date data than referenced in the text.
Published by S. O'Dea, May 20, 2022

Availability of 5G in leading countries 2022

mmWave 5G speeds across five cities in the United States 2021 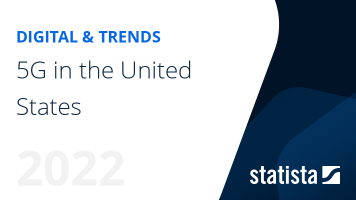 Go to report 5G in the United States
Top Seller

The most important key figures provide you with a compact summary of the topic of "5G in the United States" and take you straight to the corresponding statistics.