India had the second largest population worldwide after China, more than one-third of which lived in urban areas. Public transportation had an indispensable role in daily mobility. Majority of public transport in Indian cities relied on buses, and many had developed bus rapid transit system (BRTS) to improve capacities and reliability of the conventional bus system. Several metropolitan cities also developed mass rapid transit (MRT) metro system for more efficient and nondisruptive urban passenger transportation.
Most of the buses and metro systems were owned and operated by local state and municipal governments. Compared to urban households, more rural households preferred using buses. In 2021, the Indian government rolled out policies to raise the share of public transport in urban areas through expansion of metro networks and city bus services. It allocated 26 billion U.S. dollars for metro expansion and pledged to spend 1.5 trillion dollars on general infrastructure, including public bus network between 2020 and 2025.

In most urban areas across the country, the development of public transport did not meet the rapid rise of urban population. The share of public transport in India constantly decreased since early 2000s, and personal vehicles, especially two wheelers, saw exponential growth. Growing private vehicle ownership was the main contributor of increased congestion in Indian cities, to a point where some made to the global list of the most congested cities. Furthermore, having an adequate public transportation network would possibly curb increasing road accidents and road deaths, worsening air pollution, as well as growing greenhouse gas emissions.

In 2006, the Indian government introduced the National Urban Transport Policy (NUTP), which was renewed in 2014. It was a long-term public strategy with the aim to provide sustainable transportation in the future. Two major fields of policy focus were the development of metro systems in major cities, and electrification and expansion of public bus transport fleets. With the intention to accelerate such processes, the Indian government opened metro and bus sectors to private investors. Furthermore, the government launched the Faster Adoption and Manufacturing of Hybrid and Electric Vehicles (FAME) scheme in 2015 and a further FAME II program in 2019, which would provide incentives for electric vehicle purchases, including electric buses, and deployment of charging infrastructure.
This text provides general information. Statista assumes no liability for the information given being complete or correct. Due to varying update cycles, statistics can display more up-to-date data than referenced in the text.
Shangliao Sun
Research expert covering India
Get in touch with us now
Published by Shangliao Sun, Mar 23, 2022 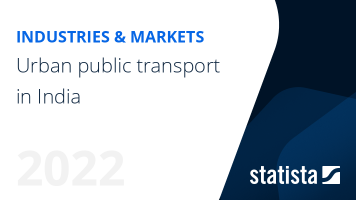 The most important key figures provide you with a compact summary of the topic of "Urban public transport in India" and take you straight to the corresponding statistics.