Published by
J. Clement,
Oct 18, 2022
Italy’s video game industry has experienced rapid growth and dynamic transformations in recent years. Previously considered a niche sector, the gaming industry has become an indispensable part of the country’s creative landscape, with new startups and studios entering the playing field each year. At an estimated 1.95 billion U.S. dollars in revenue, video games accounted for over 40 percent of digital media revenue in 2021. While these figures could not compete with leading European gaming markets such as the United Kingdom, France, and Germany, Italy’s young gaming sector has made particularly significant leaps over the past five years. This growth spurt was facilitated by a shift in the public perception of games and a range of government incentives, such as the recent introduction of tax credit for video game developers.

In 2020, the impact of the global coronavirus pandemic drove user acquisition trends upwards while gamers’ engagement rates skyrocketed. As the trend normalizes, the number of video gamers in Italy is estimated to have decreased to 15.5 million in 2021, representing approximately 35 percent of the country’s population. Young gamers make up a large share of Italy’s gaming population, with players aged 15-24 reaching almost four million in 2021. This trend is also reflected on the other end of Italy’s gaming ecosystem, which is shaped mainly by young developers and creatives in their 30s.

Additionally, gaming appeared to be equally relevant also among users aged between 45 and 64 years, thanks to the popularity and high accessibility of casual games and mobile games such as the Candy Crush Saga. Among Italian gamers, over six in 10 men reported playing more than 21 hours per week and owning at least one console or gaming PC. However, among gamers aged 55 and above, women who reported being “hardcore gamers” were 15 percent, while only 11 percent of male respondents in the same age group reported the same intense gaming behavior.

Mobile gaming has taken Italy’s gaming scene by storm. In 2021, mobile games accounted for almost 60 percent of video games revenue in Italy. In 2022, smartphones were named the most popular gaming device among Italian gamers in a nationwide survey. When it comes to the leading gaming apps on the Google Play and Apple App Store, Coin Master topped the ranking in terms of revenue in February 2022, while Hay Day and Airport Security were the most downloaded Android gaming apps in Italy. Similar trends could be observed in other European countries such as Spain and Germany, where the latter two titles also dominated the download charts at the beginning of 2022.

Italy’s ever-increasing passion for video games also translates to the realm of live streaming, as regular consumers of eSports content made up 18 percent of the Italian population according to a survey conducted in June 2021. eSports consumption is regarded as a form of entertainment, but 37 percent of Italians also attribute a social function to this activity, reporting having a positive opinion of eSports because they help create connections among people. As a case in point, professional Italian gamers on the popular live streaming platform Twitch have managed to amass a moderately large audience in recent years. As of January 2022, POW3Rtv was the most-followed Italian-language streamer on Twitch, with almost 1.8 million followers watching him play titles such as Fortnite and Call of Duty.

In the following 6 chapters, you will quickly find the 41 most important statistics relating to "Video gaming in Italy". 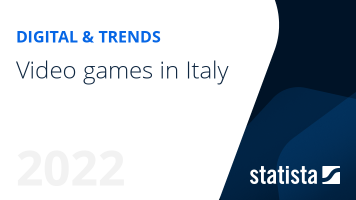 The most important key figures provide you with a compact summary of the topic of "Video gaming in Italy" and take you straight to the corresponding statistics.